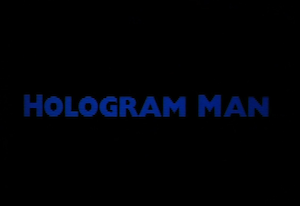 Overview: Near-future dystopian LA decides that the best way to stop a crime wave is to start imprisoning hardened criminals as holograms - a scheme which for some reason apparently has the fun secondary feature of turning those hardened criminals into invincible demigods. What could possibly go wrong?

The Case For: You might giggle uncontrollably when you hear the characters throwing around names like "Slash Gallagher" or "Decoda", or when you see "Tiny" Lister with an 8-ball glued to his forehead, but that'll only get you through about 5 minutes or so before the crushing realization sets in that you're not actually watching Demolition Man, just a much crappier version which makes references to it every 8 seconds.

The Case Against: Somehow manages to paint a more dismal outlook on the decline of human intelligence than Idiocracy, as the cops of the future try over and over again to shoot a man made of light as their only plan of action. 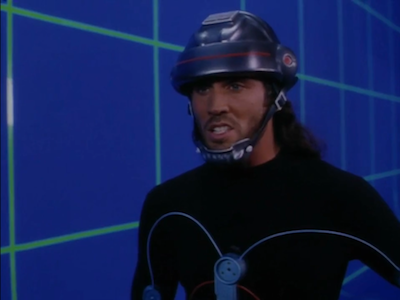 Ah, Demolition Man, truly one of the great cult classics of our time. No, don't worry, we're not here to besmirch the name of a true and seminal masterpiece of 90's retardedystopian sci-fi - we're here to review its spiritual successor: Hologram Man. Oh wait, did we say "spiritual successor"? What we actually meant was "shameless ripoff" - yes, much better.

Hologram Man is a movie that tries so desperately to write itself into the mythical pantheon of Stallones, Snipeses, and shit-encrusted Seashells that the writer literally has his own characters smugly, artlessly barfing the title Demolition Man out of their disgusting, spray-tanned holographic mouths and trying to pass it off as some perverse form of fourth-wall obliterating dialogue, as though their wishing to be a different, better (so much better) movie aloud would somehow transport them to a magical world where Denis Leary is King of the Hobos and Taco Bell gets more Michelin stars than Robuchon.

But hey, we digress. Oh, but speaking of feces-smeared seashells, you might want to start preparing yours to scrape what's soon to be left of your brain from the bloody bowl of liquefied hemorrhagic diarrhea your skull is about to become, because Hollow Graham Man [1] is about to take a random grab-bag of ideas from that other movie and smash them violently and haphazardly together until they - and whatever's left of you, as a human being - are no longer recognizable. Like the FUTURE JAIL, in which criminals areturned into holograms andbrainwashed to be enthusiastic janitors, which just seems like cruel and unusual punishment to us[2].

Corrupt mega-corporation running the whole city? Sure, let's roll with that, but then let's also make them so cartoonishly evil that their official seal is literally an illuminati Eye of Providence and their council Chairman just wanders around the city in his ultra-luxe limo with both arms held out the window, middle fingers extended to the sky, while his driver runs down homeless black children with a sinister glint in his monocle.

Super-violent anarchist career criminal and a freedom fighter who just wants to liberate the people of the city? Why have both of those separately when you can have Slash "Fucking" Gallagher:

Apparently he spent his 30 years in virtual reality lockup exclusively training with Raiden from Mortal Kombat, perfecting the ultimate Thunder God Pimp Slap technique. And if you think that's a lousy way to die, just wait until you see DEATH BY E-MAIL.

[1] This is both a horrible pun and also, potentially, the subtitle for a brand-new sequel to Gary Busey holiday cookie slasher The Gingerdead Man. Just in case Charlie Band is reading this: please don't think this is some kind of Stockholm syndrome plea for you to make another goddamn Gingerdead Man movie. We'd rather watch a hydrogen bomb test from a lawn chair sitting right at ground zero.