Tuesday, Jul 27, 2004 by Rich "Lowtax" Kyanka (@TwitterHasBannedAllMyAccountsEver)
Know of an awful site? Send it to us and become a hero!

Are You Ready to D.I.E.?, submitted by Lemonjello. Online roleplaying games are awesome because they give pre-teens the ability to feel powerful and get revenge upon the cruel, cruel world that imposes harsh injustices against them such as early bedtime, oh my god like totally NAZI schoolteachers, and girls who wouldn't give them the time of day even if they were professional time of day givers. The Internet gaming community bestows a deadly combination of anonymity and unbridled power to those who have no social life and and an ungodly amount of free time, allowing them to become masters of some online game which promotes genocide by challenging users to kill the same creature over and over and over again so their strength will go up one point and they can finally wear the red wizard hat. Guild D.I.E. is a bunch of Internet Tough Guys who terrorize the World of Warcraft beta, reigning death and destruction to all who oppose them before dad tells them to get off the Internet and go to bed. Then they take screenshots and add hilarious comments like "WE KILLED THAT DUMBASS" and "GUESS WHO KILLED THAT DUMBASS? IT WAS US!" so you know exactly how powerful they are.

I don't want folks to get nervous that ALL we do is PvP, so I am gonna' toss up some PvE goodies for you to flame us about! Oh yes, the infmaous TROLL dungeon, Zul'Farrack, is DOWN AND COINED! Yeppers, this sucker is now down in DIE's books as FARMED! Yeeeehaw!

Last night about 14 DIE and a friend attacked and took down the Horde outpost called Freewind Post in the Thousand Needles zone. The plan was a surprise attack then secure the town for a period of no less then 2 hours. We knew there would be some opposition and destroyed that, but we had expected the Horde to make SOME effort at pushing us out, but alas, it appears they found it easier to just let their brethren die and one of their cities lay under DIE control instead of fighting for what WAS theirs! 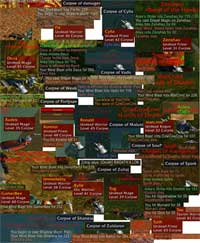 Well, enough of the PKin' pics for a while. The Horde is crying so much that perhaps we needed to give them a respite so they can whipe their tears and perhaps level some or whatever it is they want to do. In the mean time, let's take a little tour through Gnomeregan the new instanced dungeon brought live this push!

Ah yes, DIE, the ultimate in "Blueby" Guilds has gone yet another day without doing ANYTHING....cept' mebe kill a few folks! Here are your favorite Bluebs and Newbs in action!

There are tons of screenshots and helpful misspelled comments explaining exactly what is happening in all these images so you can properly understand how totally awesome Guild D.I.E. is and how they'll like totally kill you to hell if you try to play World of Warcraft and like front on 'em. After all, the Internet is a serious place and they'll kick your shit all over the floor and back if you try to step with them! I still cannot decipher these screenshots or figure out what the fuck these guys are yammering about, but I do know that I'll think twice before ever playing World of Warcraft now. It's not that I'm afraid of Guild D.I.E. or anything, it's that all online roleplaying games are a tremendous waste of time and money and appeal only to those who lack a job and life.