Welcome to the World of Sly-N-Slow

Tuesday, May 10, 2005 by Rich "Lowtax" Kyanka (@TwitterHasBannedAllMyAccountsEver)
Know of an awful site? Send it to us and become a hero!

Welcome to the World of Sly-N-Slow, submitted by Ian. Juggalos aren't really known for their intelligence and good taste as much as they're known for looking like white trash who recently fell into a vat of industrial toxins designed to eliminate the rainforests. Juggalettes, the female version of Juggalos, are even worse, in the regard that their diseased vaginas can emit a cloud of spores powerful enough to vaporize steel walls. "Sly-N-Slow" is yet another gob of retarded trailer park trash who decided to define their life by the actions of a third-rate rap group who single handedly revitalized the previously ailing neck tattoo industry. Like all Juggalo websites, this one is crammed full of giant text, spelling errors, hip hop Internet speak, and incomprehensible gibberish that will ensure this person will never obtain a job more important than a phone sex operator. 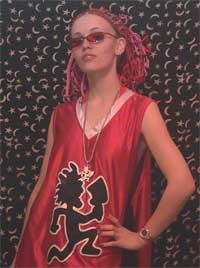 All of the above. Sly'N'Slow is a rare novelty in music. She is a female rapper who incorporates her Finnish heritage, Canadian tendencies, and her demented theories into her music. Never relying on played out fads, "music-prostitution", or revolting over-sexualization, Sly'N'Slow stands firm to represent and serve her people with REAL flava from a REAL juggalette. A clear example that being a chick in the music biz doesn't mean you have to be a filthy whore.

Congratulations, you're retarded! I'm sure I'll receive plenty of death threats for making this an ALoD today, as I do every time I mention Juggalos here, but I feel the risk is well worth it. If anybody reads a newspaper obituary describing a man who was smothered to death beneath the buttocks of a 400-pound high school kid dressed like a clown, please pray for my soul.

PS: Be sure, be VERY VERY sure, to check out her songs here. They are awesome and feature bass lines which sound like a fat man squeezing an accordion out of his anus.