Wednesday, Jul 23, 2008 by Andrew "Garbage Day" Miller
Know of an awful site? Send it to us and become a hero! 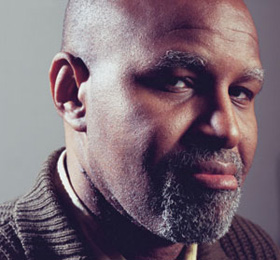 New York Press contrarian Armond White uses a three-point plan to ensure maximum infuriation. First, he takes an indefensible stance. Next, he detours into incomprehensible, tangential pop-music analysis. Finally, he'll unflatteringly liken an acclaimed film to an execrable movie he alone champions. White has attracted 394 frothing Rotten Tomatoes comments for his throttling of The Dark Knight, but his Hellboy II: The Golden Army review represents the real nadir, not only of his loathsome career but also of film criticism itself.

Disliking Hellboy II isn't completely irrational, even if 87 percent of his peers disagree, because wise-cracking antiheroes can be grating. However, instead of crafting a thesis statement related to the movie's merits, White spends most of the first paragraph praising The Ting Tings, hypothesizing that the group's obnoxious single "That's Not My Name" "reveals that today's comics-movies and their easily specious Pop attitudes distance us from realizing our own identities." Uh, no. It's a song about someone named Katie being mistakenly called "Stacey" or "Jane," and throwing a bratty tantrum about it. Also, a British dance-rock duo couldn't have less to do with Hellboy II. Even from an ADD-addled referencemonger like White, who inexplicably dragged The Smiths into his Zodiac pan and quoted X-Ray Spex at length while ostensibly critiquing Sweeney Todd, this apropos-of-nothing Ting Tings praise feels like a desperate grope from a blind lecher.

When not celebrating the Ting Tings, White savages Pan's Labyrinth and bestows ill-fitting virtues upon Adam Sandler's abortive Little Nicky. "Hellboy wrecks the symbology taught in Western Judeo-Christian culture, whereas Sandler parodied it to achieve justice-and, always, humor," White rambles in the midst of some fever dream. Justice, humor -- big attributes for a film that contains the line "can I wash my winky in your kitchen sinky?" White concludes with "Pop fans should rise up and sing the revolutionary chorus 'That's Not My Name,'" a line that's more like a stowaway sentence from a British hipster blog than a fitting end to a review of fucking Hellboy II. Still, at least it's more lucid than his bewilderingly circular compare-and-contrast exercises ("Del Toro's monster movie routines lack the freshness of hearing The Ting Tings vivify the crisis of identity that Hellboy bungles.") White's writing combines the Ting Tings' intellect with Sandler's wit -- and that's not the compliment he thinks it is. 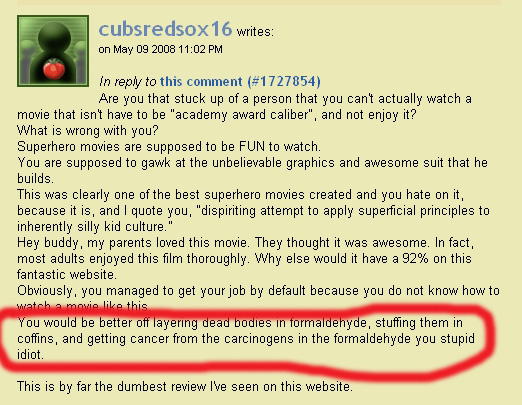