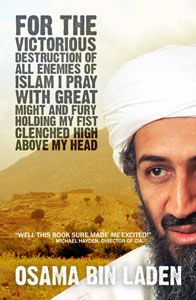 Fiction Is More Helpful Than Fact In War On Terror

Pakistan [AP]- The War On Terror hit an unexpected victory with the sudden capture of Osama bin Ladin. Sources say that bin Ladin was found immediately after the release of his highly anticipated first novel due to the unusually specific geographical descriptions contained in several chapters.

The Great and Good One, the One That Was Chosen By Allah, Ulama bin Ladhina, walked out of the cave in which he had been hiding for the last three months and in which he expected to continue hiding for another 18 months, transferring from it on Febuary 3, 2007. He breathed in the good clean air provided for him by Allah so he might strike out with firm and Holy fist at the enemies of Allah. The reason the air was so clean was because he was far from the closest city, Islamabad, 100 km to the east. He was sheltered between two mountains, one shaped like the head of a great tiger striking out at the American Devil and the other shaped a little like a bunny Ulama had once owned. It was indeed a good day to plan Holy War. His cave was 40 m from the bunny shaped mountain, which locals called Mt. Hassan.

"Well, this book sure made me excited!" - Michael Hayden, Director of CIA 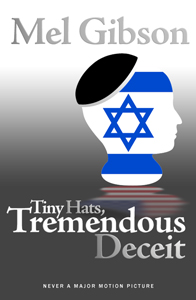 Australian Found to be Literate

Los Angeles [Reuters]- Mel Gibson, known for being a Hollywood heartthrob and a very successful anti-Semite, has one more role to play this fall: author. "I just wanted to set the record straight," Gibson says, "And a public apology just isn't profitable enough." In Tiny Hats, Tremendous Deceit Gibson delves into the world of meta-fiction by making himself a character trapped in a conspiracy bigger than any average Australian immigrant could ever handle. Gibson states, "Basically, it's like fifteen DaVinci codes at once, except with more Holocaust jokes."

Mel Gibson leaned his massive body - tempered from years of fine acting and lovemaking - against the temple wall. "Don't you worry, Herschel, we'll get to the bottom of all of this and clear your name, if my name isn't Mel Gibson." Mel Gibson then put his hand on Herschel's shoulder, even though Herschel smelled bad and was gross. Hershel then smiled - well, maybe it was a smile, it was hard to tell with that gigantic nose of his - and replied, "YES MY FRIEND, NOW GIVE ME YOUR PIN NUMBER." "But Herschel," Mel Gibson said Christianly, "How will that prove that you're not part of a secret clan of underground Jew bankers who control the world's economy?" Herschel did not answer his loyal friend; instead, he used his long serpent-like tongue to eat live bugs out of the air. When Herschel was finished with this disgusting act, he turned to his rugged, appealing friend and shouted, "ENOUGH OF THIS MATTER. LET US POISON THE WELLS."

And so, Mel Gibson, trusting as always, went off with his good friend Herschel to poison the town wells. He only hoped that maybe this would get his pal out of trouble.

"I never thought a book could be more exciting than The Bible! Mel Gibson makes Christ look like a pile of shit!"- Gail Matthews, Christian Book Review