Project P, submitted by Internet. One of the fun things about the Internet being an essentially limitless font of pornography is that no matter how jaded you become, there will always be something out there, somewhere, that will surprise you. Today's ALoD is one of those shocking diamonds in the rough. It's a very professionally presented website about naked pregnant women. It's so well done that I could see it cropping up in someone's portfolio during a job interview. "Oh, yeah, that. Well, that's just a site I worked on in my spare time about pregnant women".

Oh, I'm sorry, did I give you the impression that these were normal pregnant women? Oh, haha, my mistake! Heaven's no! These women aren't just pregnant, their guts are digitally swollen up like an engorged tick. Sometimes they stretch the bounds of reality and sometimes they blow it away. Their abdomens distend enough to carry a Japanese car to term and they have huge nipples that protrude like accusatory fingers, pointing at a God that could not intervene and prevent their digital pregnancy. Several of the women resemble Violet Beauregarde as she is carted out by the Oompa Loompas, with the addition of gigantic nipples and breasts, of course. 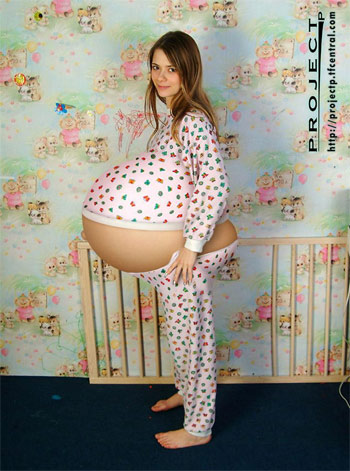 The pregnancy images are impressive, but the real revelation to be found on the site are the numerous image sets that involve a woman transforming into a cow. The transformation involves her belly swelling to immense proportions, but that's nothing compared to her hands becoming Teenage Mutant Ninja Turtle paws and her genital region erupting in a plague of udders. The horror isn't even in the concept, it's in the execution. These images, although obviously edited, look just realistic enough to put your hairs on end. They'll make you think that maybe you need to start following what the North Koreans are doing in their secret underground science labs a little more carefully. 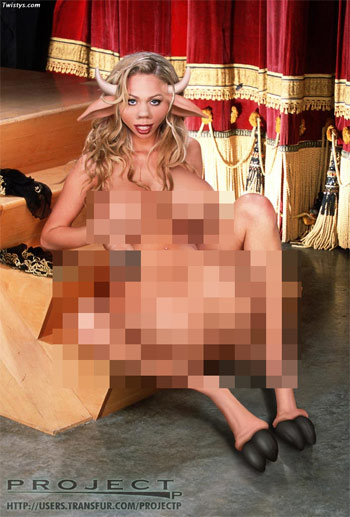 I think the "P" in "Project P" stands for pregnant, but if it does that really isn't a sufficient word to describe the site's content. Maybe "Meganant". No, that doesn't warn the viewer about the animal transformation aspect. How about: "run while you can"? Sweet dreams.