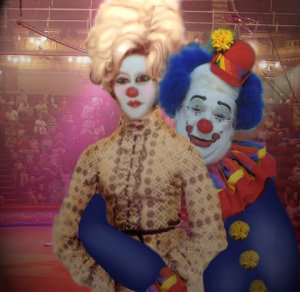 When we last left her, Shirley had passed Clown College with flying colors, becoming an integral part of the roaming Midwest Blood Harvest Moon Circus. She had also become involved in a torrid clown affair with a masochistic brute known as Buttons. This was witnessed by Koko, a female clown of ill repute who was smitten with Buttons and swore revenge against Shirley for stealing the object of her affection. She had even caught the eye of the ringmaster, an ageless man with a forked beard and frothy red eyes.

The heat of the summer was killing off mules by the dozen, and turning the crops into dusty clouds of locusts. The poor people of Bolton, Nebraska needed something to take their minds off of the crushing hopelessness of their meaningless existence. They were in luck that day, for the circus was in town…

The first thing they teach in Clown College is not to struggle. Don't fight the fiery pain radiating from your wounds. Give in to the consuming embrace of black oblivion, as you feel your life slipping away to little more than a whispered dream. Accidents happen, and if you can't joke about the horrors of life, then you are in for a long ride.

The show was off to a rough start. A clown by the name of Peter the Great was walking on stilts while playing the Star Spangled Banner on his kazoo when a rogue lion escaped its holding cage and leapt on him -- he was an obvious target, since he always reeked of sausage and rye. The crowd screamed in horror and delight as the lion's razor sharp teeth tore into him, sending an arc of crimson blood into the front row. A team of clowns dressed as police officers with huge floppy shoes ran out and beat the lion to death with clubs before dragging it off the stage. The show had only begun.

The lights dimmed as the ringmaster walked to the center of the tent. The crowd fell into a hushed silence, except for a one bawling child in the front row. With one crack of the ringmaster's whip, the brat was silenced, his larynx catapulted into the monkey cage where they fought over this surprise treat. The ringmaster then started his festival of flames, a whimsical act where flames of all colors danced around the tent. The audience cheered at the special effects, although the heat of the swooping flames and the resulting burns on their faces and arms were very real.

Shirley was backstage adjusting her makeup for the next big act, the "clown free-for-all". She had just spent the last ten wonderful minutes engaged in an intimate act with Buttons, her new boyfriend. He had taken off his puffy shirt, bellowing in pain from the scorpion bites he received last night. She oiled down his generous folds of fat with bacon grease and fed him live crawfish, his sharp teeth rending their shells into a noisome mush. It pleased her greatly to see that Buttons was satisfied with the attention she gave him. She would do the same for Norman, but he never once showed his appreciation or reciprocated in any way. She had never felt this way about a clown before, and as she finished putting on her red nose, her heart soared like Kevin Costner being shot from a catapult over a castle wall. 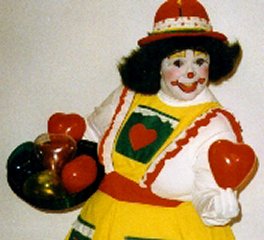 While Shirley prepared herself, the tawdry clown Koko lurked in the shadows, plotting her evil schemes. She burned with jealousy over the fact that Shirley was able to seduce Buttons in one day, when she had been trying for the past five years to no avail. She had been rebuked by Buttons again and again, failing to meet his base desires and unable to gain his respect in clowning. Now she had concocted a plan that would spell doom for Shirley, her revenge for taking her man and insulting her pride. She would spring this trap during the height of the next act, and it would surely cause Shirley's demise. Koko withdrew from the shadows, giggling in anticipation of the carnage to come.

The whistle sounded, meaning it was time for all the clowns to assemble in the middle of the tent. The free-for-all was an event where the clowns fought each other with oversized mauls for ten minutes. The children all cheered, for this was their favorite part of the big top show. The free-for-all had been a tradition since the Roman times of coliseum clowning, and injury was common.

The ringmaster handed out the colorful mauls, chanting the omens of Loki and marking each participant's forehead with a single line of red paint. Another piercing whistle signaled the start of the event.

A clown landed in the hay and manure, breathing bubbles of frothy blood in a hoarse gurgle. Buttons swung again, this time connecting with the knee of a clown named Bingo. It snapped like a tree branch, folding backwards under his weight and sending him toppling into a cream pie -- much to the delight of the children.

Shirley was at the other end of the tent defending against Jo-Jo, a feisty redheaded clown who collected rotten bananas. Her maul landed soundly against Jo-Jo's temple, sending him sprawling across the ring and into the snake pit, were he was bitten on the face by a cobra.

The ringmaster then opened the cages of starving, diseased monkeys, releasing them to cause further chaos with their teeth and claws. (One monkey escaped the tent and made all the way to the next town of Jasper where soon a mysterious plague would break out, killing 70% of the town's citizens.) Under the cover of this bedlam, and five minutes into the free-for-all, Koko fought her way to Shirley's blind spot.

Buttons spotted Koko as she prepared to strike his beehived beauty. He sprinted to the rescue, sweeping all opponents and rabid monkeys in his path aside. Koko brought down the specially-crafted maul. Gleaming from its center was the black horn of a rhino, fused into a metal plate and tipped with spotted seahorse poison.

Buttons leaped in front of Shirley, taking the hit that would have undoubtedly killed her. All the fighting stopped -- except for the monkeys, who attacked the clown selling pretzels in the stands. All eyes looked to Buttons, the seemingly invincible clown who was the terror of the Midwest. He fell to the ground, the large rhino horn protruding from his chest while black, sticky blood pooled around him. Shirley let out a cry and ran to his side, stroking his fuzzy hair and rubbing his soft red nose. And thus he spoke:

"O, I die!
The potent poison quite o'ercrows my spirit.
I cannot live to hear the news from England,
But I do prophesy th' election lights
On Fortinbras. He has my dying voice.
So tell him, with th' occurrents, more and less,
Which have solicited- the rest is silence."

Nobody knew what he was talking about, but that was Button's way. He then passed on, causing a deep shuddering of the earth. The clowns all cheered, for they were now all free to leave without fear of being hunted, and could all return to their lives in society once again. The ringmaster was nowhere to be seen, seemingly vanishing into thin air and taking all his belongings with him.

The crowd clapped at the finale and filed out of the tent, ready to return to their life of drudgery and crop failures. The circus thus disbanded, and clowns and midgets alike fled into the woods, far away from the scorched earth where so many dreams had died.

For Shirley, this was a tragedy beyond comparison. For the first time since her childhood she had felt free and alive, at home with the spirit that came with being in a traveling circus. Her paradise was short-lived, and she feared that there was no choice but to return to the everyday life she had run away from.

What would she do now? Where would she go? Her path was unknown, but she had a feeling it would be in the retail shoe business. She starting walking towards Kansas City, taking a picture of Buttons out of her beehive hairdo and tossing it into a ditch. The lives she had left behind were now a distant memory. Shirley's future lay down the road, into the darkness

I refuse to do a Daily Dirt today. You can't make me. You're not my father. LEAVE ME ALONE!