Monday, Aug 13, 2001 by Rich "Lowtax" Kyanka (@TwitterHasBannedAllMyAccountsEver)
Know of an awful site? Send it to us and become a hero!

America, WAKE-UP! "Quadrant Sign Code"--EXPOSED!, submitted by Dave. The government! The UN! FEMA! UPN! They're all out to get us and steal the alien radio transmitters embedded in our right molars! "H.R. Green Jr." exposes the lies and deceit of the American government by offering a series of blurry photographs enhanced by an image editing program that is seemingly incapable of anti-aliasing. Not that the jagged text is able to detract from the fact that the webmaster is a few donuts short of a baker's dozen. These pictures apparently reveal some large conspiracy where the government, during a time of national emergency, will take over our houses and use them as military rumpus rooms. The "proof" is simply the photos themselves; no additional evidence is apparently necessary.

Are secretly embedded codes like these part of "Operation Garden Plot" where the military will police and patrol our streets and highways during MARTIAL LAW? Are detention areas, and facilities with massive air-lifts planned to relocate the populace to "safe zones" during a bio/chem or nuclear attack? Are these the literal "signs of the times" spoken of by the Lord Jesus Christ in the "LAST DAYS"?

Oh no! Not the proverbial "LAST DAYS!" And I put off buying a new car muffler, under the foolish notion that I would live forever! I originally thought that Mr. H.R. Green Jr. was just another babbling incoherent nutball, but then I took a closer look at the stop sign outside my apartment. The results will horrify you! 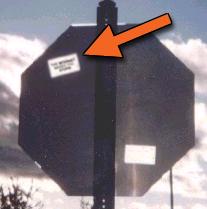 The back of the stop sign. Note the large orange, anti-aliased arrow which I edited in by using my FEMA-proof version of Photoshop 6. Now take a closer look at this sign: 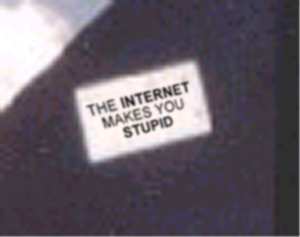 Who am I to argue with the government?