Da Ghetto Tymz, submitted by Steve. The motto of this site is "Penetrate your inner self," which pretty much says it all. That is, if by "says it all" you mean that it says "please insert your head into the nearest microwave and I will make it magically turn on even though the door is open upon, causing your head to be cooked and explode in a fountain of blood much to the amazement and delight of onlookers, sucka-fool niggah." Or maybe it simply just says, "This is a terrible site designed to sell a magazine for 'Afrikans' who buy into irrationally wacky and globally corporate conspiracy theories." Whichever one of these meanings may be the case for you, one thing is certain: this site will be here for ever! For ever and ever! And ever and ever!!! Do you understand? FOR EVER!!! 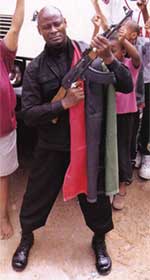 "Yearz ago, I wrote some piecez on Masonry that introduced the mataphysical and numerology side of Masonry. Well, some recent research showz Masonry is tied all in the Pentagon and World Trade Center attackz..."

Of all the wealth we Afrikanz-in-America have access to, we owe it to our future to establish both a connection and business support mechanism in Afrika. Maybe we could finally get an Afrikan-made automobile? But this takes a belief in, first, self, and second, our people. Both seem to be somethin' we all grapple with, thanks to YTs use of tricknology, and 'How to make a slave' tactics.

Yeah, and once I had a prizzoblem with my toilet so I called tha plummer and he came ovah to the hizzouse to fixify it. He bent over the pipez and lo and be-hold there was the dead body of Estelle Getty from 'Da Golden Girlz' floatin' in tha bizzowl. This is how I knew that the Mideast Crisis is actually a result of the Teamsters' Union and their failure to recognize tha Afrikan Conspiracy Theorist as a valuable member of Teamster society. But dat's cool, yo... because we will be here for ever. For ever and ever! And ever!!!

This site comes complete with a listing of what will be in the upcoming issue of 'Da Ghetto Tymz,' which includes the gem "The 'WB's continued assault on Afrikan history." How reassuring to know that the people who are so concerned with the treatment of minorities in this country can take time out from their busy finger-pointing schedule to caution us on the evils of the WB! Apparently the reruns of last year's "Homosexual Mummy Slayer 2: The Madness Bloodening" and the late-night infomercials for "Super-Choppy-Choppy-Knife-that-Looks-Like-a-Benito-Mussolini-Action-Figure-but-is-Actually-a-Knife" knife are not properly recognizing the Afrikan conspiracy-loving population. I think that some new WB shows that would be sure to make Da Ghetto Tymz folks happy would be something along the lines of:

Fat Bitch Wanna EAT: Taco Bell Food is Made of People. It's PEOPLE!!!

Yo, Datz Fucked Up, Yo: Why World War II was a Cuban Alien Invasion By Da White Man.

We will be Here for Ever. And Ever and Ever! Do You Understand? FOR EVER!!!

"Our readerz are yearning for Black businesses to patronize. They are active, curious and artistically creative with the ability and resources to go after what they want; and most importantly, they want to purchase from Black-owned businesses in their community. We are, and will continue to be a reference for that target audience, raising self-esteem through a true Afrikan knowledge of self, which of course, 'can only be found undaground.'"

Maybe "undaground" refers to a huge coal mine. Maybe it doesn't only contain coal but also the remnants of the mind control device that was used to force the black man miners to mine coal in an even deeper coal mine located within the coal mine. And the mind control device is operated by Masonic members who oversaw operations in the coal mine with help from their pet cats and various tasty whiteman sausages. The knowledge of self (self that can be penetrated, mind you) comes into play when the Masonic miner-mind-controllers decided to blow up large buildings in major American cities or begin global thermonuclear war. Either way, Da Ghetto Tymz will be there for ever. And ever. AND EVER AND EVER!!!

NOTE FROM EDITOR: This site is absolutely insane. I mean, we're talking BEYOND the realms of any connection to reality whatsoever. Check out these quotes:

MICROSOFT, STILL PRACTICIN' RACIZM: The MICRSOFT, Still practicing racizm I was goin' through my usual routine editing articles using Microsoft 2001 when I noticed one of Microsoft Word's toolz features a dictionary. So bein' the analytical person that I am, I recalled the National Association for the Advancement of CERTAIN People's (NAACP) recent praise for Webster's Dictionary taking out the word "Negro" from it's vocab (as if we should think YT took the word out remorsefully). Well maybe these negroes should petition against Microsoft because if you misspell "negro" with a lower-case 'n', it will automatically spellcheck it to a capital 'N', stating it as a noun

From Nigeria to South Afrika, women and men are using creamz, lotionz and sometymz capsules to get whiter skin. Dermatologists warn that they are dangerous enough that they should be banned because they contain large amounts of hydroquinone, a white crystalline de-pigmenting agent that can be fatal in large doses. Symptomz range from ringing in the earz and nausea to shortness of breath, convulsionz and delirium. See, it ain't just us in the Americaz. If we're all educated on the importance of "Afrikan pride" we'd wouldn't be doin' this -ish! This attitude is part of the legacy of slavery and colonization, which perpetuated Afrikan self-hatred.

In 1857, the u.s. supreme court ruled that Afrikanz were only 3/5ths of a man and had no rights that YT were bound to respect. Think thingz have changed?? Did U Kno that today, nearly 150 yearz later, we still earn less than 3/5ths of what YT earnz, yet we spend over $580 Billion last year?!

Did U ever think Y YT has gone through so many measures to make the masses believe wo/man evolved from apes in the mountainous region of europe. Readerz of DGT know from the "IZ YT Hueman? or Mutant! series' that we did not evolve from apes. But that's not the real beef. According to webster, evolution meanz to 'change from a lower, simpler or worse to a higher, more complex, or better state.' YT has taught us that we changed from apes to huemanz. But think Afrikan...how could that be?! If we evolved from apes, Y are apes still here?!

This technological phenomenon can be attributed to the invention of the world wide web, or www. (which has been said to be equivalent to 666).

Believe it or not, Tony the Tiger may be a part of the One World Government, aka the New World Order, bka the Illuminati.

The major coinz used are the penny with good 'ol Abe Lincoln; 5 cents, with Thomas Jefferson; 10 cents with T. Roosevelt (some say Harry Truman); and 25 cents with cherrytree choppin' George Washington. What's madd deep are the makerz (the government) of these coinz mentality. Abe, mistakenly noted for 'loving the slaves so much, he wanted to free us' ­ a bold lie ­ is the only piece that has both a different color and faces in a different direction. "Y IZ Dat?!" Y is the penny brown while the otherz have a silver appearance? Y do the otherz look left, or westward (denoting western thought) while abe faces east? The penny is the cheapist of all and is the color shade of the Afrikanz he emancipated. It appearz to me the makerz of these coinz felt Abe wasn't in the same class as the otherz. They must've felt he was a "Afrikan-lover". But if they peep history they'd find Jefferson was one of the biggest Afrikan loverz. So both Abe is punished forever more by engraving his grill on a penny and we Afrikanz are belittled, yet again, as the penny proves to be the least of worth. When you see a penny on the ground what do you usually do? Walk over it. But if it's a quarter, dime and even a nickle, you might twist your ankle tryin' to grap it over the next man. But in retrospect, when you flip it, there are more penny's you'll find than all the otherz put together. Now what does that say about unity...there is strength in numberz!