There's the history you know about. The stuff you learned in school which shaped the world you live in today. Then there's the history you don't know about. The things that didn't happen, and which by not happening, changed the world you don't live in today. These events can be monumental in their importance for having not happened, but even the most insignificant non-events can be just plain fascinating. Whatever the reason is for alternate history not being taught in school, I can assure you that in an alternate timeline it is being taught. It only makes sense that I pass along all that I learned to you to avoid even more people not knowing what didn't happen.

When the world's first organism with feet takes its hesitant steps out from the ocean and onto the waiting shore, it slips on a discarded banana peel left behind by a careless gorilla. Frightened by this harsh new world, it scampers back to the relative safety of the water.

Inspired by a large upswing in his approval rating after the famous incident in which he was shot but completed the speech he was giving, cunning president Teddy Roosevelt convinces members of the secret service to open fire upon him at the beginning of every speech from that day forward. He is subsequently shot 374 times over his sixteen year term in office, and dies with only one month left to serve due to a baffling case of Sudden Infant Death Syndrome.

While working on the theory of relativity, Albert Einstein stumbles upon concrete mathematical proof that it's okay to pork your cousin.

Due to a communication breakdown, the Great Wall of China is constructed 4,000 miles tall and 35 feet long instead of 35 feet tall and 4,000 miles long. Mongols completely overrun China within the year, but many perish in their treacherous trek up the wall.

Adolf Hitler's most embarrassing moment comes during the height of the Nazi party's power when he mistakenly orders a loaf of Jewish rye bread, much to the shock of everyone else in the book store.

Sensing an impending disaster, the citizens of Atlantis move the entirety of their amazing city to idyllic New Orleans.

After a tell-all book based on second hand accounts of his steroid use is published, an asterisk is placed in the record books next to Ken Jennings' 74-game win streak on Jeopardy.

Found guilty of corruption on an unprecedented scale and widely seen as an ineffective organization, the United Nations is replaced with the Harlem Globetrotters, who keep injustice at bay by defeating global threats with fantastic ball dribbling skills and water buckets secretly full of confetti.

In 1994, M.C. Hammer comes across a time machine and completely disappears from the public eye in a much cooler way than he did in our timeline. He travels to 1400 B.C., where even then M.C. Hammer jokes are considered old and played out.

Upon landing on the moon and encountering no space sluts, the crew of Apollo 11 report the mission a total failure and dejectedly return home. As one final act before NASA is shut down for good, a rocket is retrofitted with a gigantic nuclear warhead and sent on a collision course with the moon, destroying it and vanquishing its hidden race of subterranean space sluts.

Charles Manson's brilliant ploy of carving a cross into his forehead pays off, as it is determined that imprisoning him would "probably be a violation of that church and state thing". With a new lease on life, Manson undergoes metamorphosis and becomes a giant butterfly of unequalled beauty. He is arrested three years later for the brutal killings of three high profile senators. Manson pleads "butterfly" to the charges, which actually adds seven years to his sentence thanks to a bizarre law on the books in California. 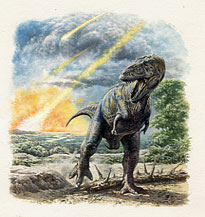 After a giant meteor strikes the Earth and fills the air with unbreathable iridium, the dinosaurs realize that their only hope to stay alive is to fast and hold their breaths for the next 10 years. Their plan works flawlessly. During the celebration that follows, they all jump into the pool mere minutes after eating barbeque. None survive.

Instead of concocting the delicious treat between two slices of bread that we all know and love, the Earl of Sandwich creates sexual intercourse. It fails to catch on, and he is completely forgotten by time.

A completely functional and safe flying car is designed and mass produced in 1993. Unfortunately, flying roads are not invented for another 30 years and the project is an utter failure.

During the first Olympic games the only event is the slam dunk competition. As is to be expected, the Japanese bobsled team wins the gold medal handily.

Apple Computers is founded in 1976 by Steve Jobs, Steve Wozniak, and Ronald Wayne. It is shut down by the authorities within months after dozens of customers are hospitalized from consuming jagged chunks of circuitry and wires. Seven months later, Orange Computers is founded and becomes an overnight success thanks to their much more appetizing mixture of circuitry and citrus.

The largest ship of its time, the Titanic, sets sail from the southern shores of England and into disaster. Several passengers complain of filet mignon that has been overcooked, and one unfortunate man has to wait over ten minutes to ride on a pony.

William Shakespeare reveals that he doesn't understand half the crazy shit he has written, then eats a pastry. The specific type of pastry is unimportant, it is only necessary that you know it is a pastry.

Namco's new arcade game about a circular yellow character who avoids ghosts while eating power pellets has a project title of Puck Man. At the last minute one executive realizes that vandals could simply change one letter on the game's cabinet to spell something vulgar, so Puck Man is renamed. The following month, Puck Guy debuts in arcades worldwide.

They say that those who don't remember history that didn't happen are doomed to not repeat it. If that's true, I'm not really sure whether it's in your best interest to have read today's update or to not have read it in the future.