Saturday, May 11, 2002 by Rich "Lowtax" Kyanka (@TwitterHasBannedAllMyAccountsEver)
Know of an awful site? Send it to us and become a hero!

Idaho Ghost Hunters, submitted by Jason. As the acting career of Craig T. Nelson has repeatedly taught us, there is nothing quite as scary as being chased by ghosts while your hair is falling out in grapefruit-sized clumps. The Idaho Ghost Hunters club is composed of "a group of people in Boise Idaho with a common interest in the paranormal and ghost sightings." Wow, I can imagine the raw excitement during one of their meetings! I bet the local Boise Burlesque House has to shut down in fear of their rampant rowdiness! All rape jokes aside, I'm sure the Bosie, Idaho Ghost Hunters Club is like some kind of ultra-secret organization where all the members have an ultra-secret handshake which somehow always involves them tickling the palm of the other member with their middle finger. It's that kind of dedication to the paranormal that has made the Idaho Ghost Hunters the only club in Boise, Idaho to call themselves the remarkably retarded name of "Idaho Ghost Hunters." 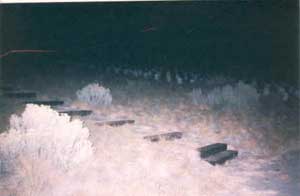 Oh no! Ghosts! Quick, everybody move out of Idaho City and relocate to scenic Bubble City, which is 98% ghost-free! Wait a minute, who the hell lives in Idaho City anyway? I'm fairly sure that Idaho isn't even a state anymore, it's like some province of Canada or something. Or maybe they turned it into a big parking lot after everybody fled from the chronic specter infestation that the Idaho Ghost Hunters warned them about for years. This is just like that killer bee thing that happened around 1999, when Fox News convinced us all that it would be in our best interests to panic and hide from the bees that either didn't exist or decided to go on strike at the last minute. The only citizens remaining in all of The State Formerly Known as Idaho are the experts at the Idaho Ghost Hunters Club, who fight the paranormal by taking blurry photographs of nothing whatsoever and them uploading them to their Tripod website. Way to go guys! Teach that bastard Casper a lesson! I'll be rooting for all of you from inside my puke-stained, filth encrusted bathtub! USA #1!