Wednesday, Jul 16, 2008 by Andrew "Garbage Day" Miller
Know of an awful site? Send it to us and become a hero! 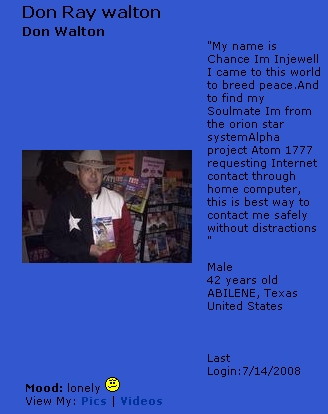 When Metal Sanaz, the Elvira of MySpace, posted a blog entry shilling her latest self-promotional merchandise, she elicited the usual "you rock" and "cool lol" responses, with one notable exception: A 2,000-word ramble that begins with the phrase "1 Alien message to man End of Earth not yours or our fault." While Don Ray Walton's regretful warnings about the impending apocalypse didn't stimulate much discourse, they didn't go completely unnoticed.

On his MySpace page, this self-described "human alien hibrid" reveals the truth about cosmic topics such as Alpha Project Atom 1777, the little-known planetary implications of the Mount St. Helens eruption, and "disasteroids," all without yielding any comments or kudos. He wrote a book called The Coming Human Aliens, a "mind-bending blend of science fiction and fact" that describes his unique extraterrestrial parentage, but it's received nary an Amazon review. Saddest of all, Don Ray posts several photos of himself drinking in solitary settings, captioning these images with slight variations on the phrase "I love to party, but not alone." Being an interplanetary visitor, Don Ray struggles with homosapien concepts such as "HTML," hindering his communications. He's a simple man, as advertised by his Lynyrd Skynyrd profile song, but he's carrying a complex message. Befriend him now, and when a black hole swallows the sun in 2012, you might be among the chosen few who "will be allowed to leave with us and be transported to a new earth in a safety zone." 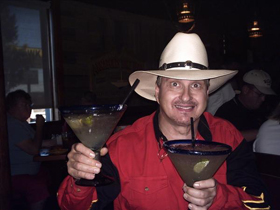 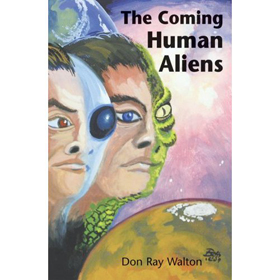