#DumpStarWars: The Anti-Trump Scenes From Rogue One Have Leaked 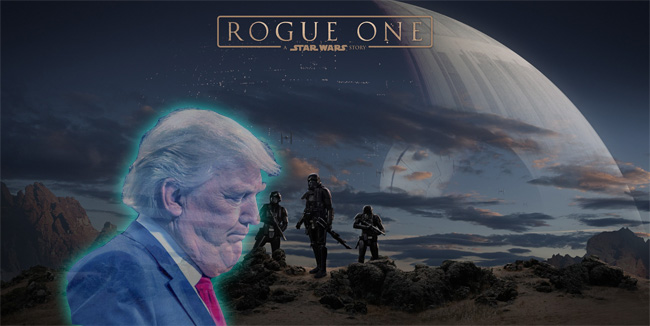 It's time to #DumpStarWars for disrespecting President Trump with insults added during the re-shoots. Listen to the good Obama:

If you don't believe him, you can read these leaks from the Rogue One script to find out why the boycott is incredibly important.

Jyn Erso meets with veteran freedom fighter Saw Gerrera. She asks for his help on her mission to recover the Death Star plans.

JYN: We can win this. We have to win this.


SAW: Whoever has the most votes should win.


JYN: The Empire will never allow us to vote.


SAW: That is because the system is broken. It must be healed, Jyn. Do whatever it takes.


JYN: How, when there are so many forces set against us?


SAW: Are you familiar with something called the Galactic Electoral College?

Aboard the U-wing "Rogue One" en route to the Death Star rebel Jyn Erso is discussing plans for their mission with blind, force-sensitive warrior Chirrut Îmwe.

JYN: We'll be dropping out of hyperspace soon.


CHIRRUT: Many dangers await us.


JYN: We will have to power down the ship to disguise ourselves as garbage and drift into their gravity well.


CHIRRUT: That reminds me. I know someone I really wish would power down. (He picks up a hologram and activates it.)


JYN: What is he talking about?


CHIRRUT: (Rolling white eyes) Nobody knows, that is the thing. We cannot figure it out because this guy is bananas.


CHIRRUT: I do not know that either.

Jyn Erso and her team are escaping from the Death Star supply base on the surface of the beach vacation planet Scarif. Jyn is confronted by villainous Imperial officer Orson Krennic.

KRENNIC: The power of the Empire cannot be stopped.


JYN: The Dark Side has fooled you, Krennic. Even if we fail today, the Rebellion will never end, because you are corrupt.


KRENNIC: (Turning slowly to face the camera) The real corruption is a leader who fails to divest themselves from their business interests or, even worse, leaves their children in charge of their businesses.


JYN: (Puts her hand on Krennic's shoulder and looks into the camera) Imagine if Darth Vader was running half the galaxy and he left Luke Skywalker in charge of his business.


KRENNIC: Now THAT's a dark side.


JYN: The irony is that white people are the darkest of all.


DARTH VADER: (Stepping up behind them and putting his arms around them both) That's why we have to genocide all whites. Without whites around, this galaxy far, far away will finally be free of war.

Poe Dameron and Finn from Force Awakens are visible standing in the background nude and kissing. A droid reminds the audience that technically Poe Dameron is Latino, not white, so he is allowed to live in the perfect future.

Join me in saving the white race from genocide by Star Wars and #DumpStarWars. It's time the silent majority - who is usually quiet about so many things like gay people getting married and Starbucks saying "Happy Holidays" - finally rise up and make some noise. We're not going to take this anymore.

Star wars isn't the only thing you need to watch out for:

Ok folks. Got to admit it. Anime has short-circuited my brain!