The Awful Links of the Day have been pretty wholesome lately, mostly weird religious sites, inept entertainers, conspiracy theorists, terrible designs and the like. But the other kind of awful site ends up in my inbox, too, and I put off looking at that kind of thing for as long as I can before it's time to enter some combination of "gross," "horrible," "naked" and "furry" into the keywords search window and publish whatever abomination appears. An anonymous submitter claims the star of Leinir's Gallery goes to his/her university, and he/she says "I died a little when I found it." Feel free not to proceed any further unless you, too, are willing to suffer no small measure of incremental death.

For example, here is a sample from Leinir's aptly named "In Screamovision" gallery, in which he dons a rubber suit while going about his daily routine; apparently, he took these photos as a birthday gift to someone named Furble. 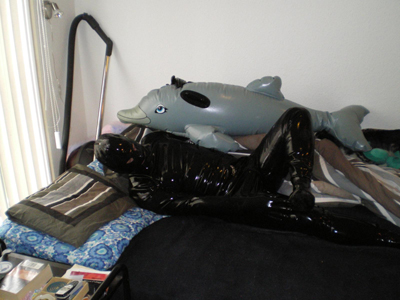 When he's not petting an inflatable dolphin while dressed as The Gimp or hugging a stuffed mammal while modeling a snake zentai, Leinir prefers to pose while wearing nothing at all. While I certainly don't suggest looking at any of these, and I wholeheartedly condemn his use of descriptors such as "pawwing off," "nummmmmmy" and "squishy," I'll go ahead and print a censored version of one of them because -- look at it, it's pretty fucking hilarious. 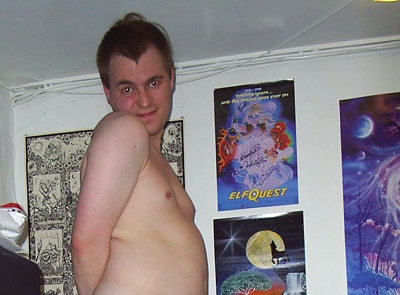