Ladies and gentlemen of the press, it's over. I'm sorry. The Internet has taken the last bastion of print media, the political cartoon, and trumped it. Witness the fall of the New York Times' ivory tower, the collapse of The Republic. (The magazine, I mean, not the USA. Not yet, at least. I pray for the coming netopia). I give you Crazy Sam Comics. 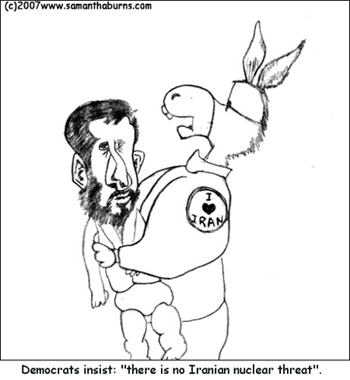 Where the print form must hold its tongue for sake of sponsors, Crazy Sam is not a slave to anyone - no dollar can buy her allegiance! Thus, we are given true impartiality: news uncensored, unfiltered, untainted by the cruel realities of punditry and partisanship. In what newspaper could you imaginably find jabs at both Media Matters and the Drudge Report - not just in the same strip, but in the same panel!

There are no sacred cows here, only political bovine lining up for the slaughter, their every dishonesty, every questionable action held up for a close, witty examination. Arnold smoked pot? Observe in horror as his brain turns to mush, unable to recall even his most famous line without a stutter! Brad Pitt, a heterosexual man, supporting marriage rights for the gays? Crazy Sam steps forward and says what we're all thinking - what is Brad really up to?

Ominously, Crazy Sam hasn't submitted a new comic since November 2007. Maybe those fat cats from print journalism, riding high on their good fortunes, banded together to muscle her out of the arena. Or maybe she picked the wrong "Moron of the Month" on her home page back in June 2009; the award-winner remains suspiciously unnamed, and she hasn't been heard from since. But you can't silence her forever! Crazy Sam is crazy indeed.