Wednesday, Jun 17, 2009 by Andrew "Garbage Day" Miller
Know of an awful site? Send it to us and become a hero! 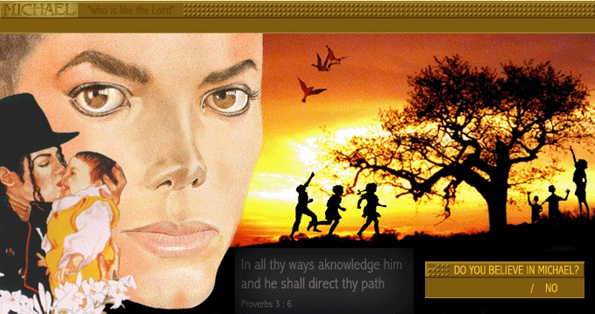 Fine, if I confirm my absolute faith in Michael Jackson, will he stop swallowing that baby?
These are dark days for m-jackson.com. At the peak of its popularity (1998), it was "the biggest Michael Jackson site in the world," and even Jackson's guitarist Jennifer Batten was moved to say "you guys are really high-tech!"

"Our site was chosen as Celebrity site of the day on 31 March 1998! They apply strict standards to becoming Celebrity Site of the Day and about our site they said: This Michael Jackson site tries to inform all the fans by giving out good reports, nice updates and beautiful pictures from Michael Jackson wherever he is."


As recently as 2005, the site connected with Jackson, who autographed a copy of its publication "MJ Times." (Headline: "Justice?") But other than sporadic updates and a few sad ad solicitations, the site now offers little except a questionably functional marketplace for ancient merchandise (Thriller air freshener, perfumes from 1986's Magic Beat collection -- surely these items have only enhanced their enchanting odors over the years.)