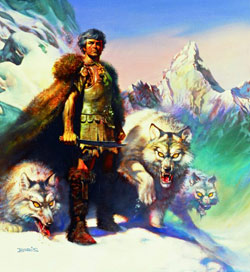 Eons ago on the frosty northern part of the super continent of Pangaea, a solitary village occupied the frosted steppes. This was the home of the Wulfgar tribe. These barbarians of the north hunted the bears and whales of the north for food and clothes and did battle with the degenerate ice trolls and their goblin allies.

Mightiest among the Wulfgar was Oggmeer the Old, great king of the Wulfgar, he who wielded the ring of frost that gave him the power to control the weather within reason. He could use the ring to redirect the course of a blizzard slightly or to increase the temperature just enough to prevent frostbite. But, Oggmeer was old, and he had many scars upon his face and back and chest and arms.

One day Oggmeer called his son Ingmar into the Wulfgar great hall and he said to him, "Ingmar, you are grown a man and you are the strongest in the village. It is time for me to climb aboard my boat and sail off into the foggy beyond, where barbarians live forever and dine in the halls of Wulfopolis."

"No father!" Ingmar exclaimed with sadness. "You are strong still and I am not ready to lead the tribe."

"You have a good and strong woman at your side," his father said and pressed the ring of frost into his son's hand. "You should marry Arissaha and give her gigantic children. My wives are old and frail and have had menopauses. My back is bent and when I berserk I no longer really feel into it. You know, it's sort of like I have to, not like I want to."

"But father-," Ingmar argued, but his father waved him off.

"No, Ingmar," Oggmeer said sadly, "it is your duty to the tribe. The ice trolls will be back soon and the Wulfgar need a strong leader. Also there is word of a mysterious and evil wizard. I wish I could provide more information on that but all of my scouts to his crystal citadel have been returned to me as bloody corpses."

"Father, surely with the wizard and the-"

"Enough!" Oggmeer roared. "I sail for the shores of Wulfopolis. Fetch my canoe and a crust of bread."

Ingmar could do little else but watch his father and his canoe disappear into fog covering the waters of the Forbidden Ocean. No man ever returned from their journey to Wulfopolis and the barbarians were not stupid. Despite his sadness, Ingmar did not cry tears, for they say in the north that the hard men of the Wulfgar cannot cry because tears are frozen from coming out by the cold air.

With reluctance, but also some pride and majesty, Ingmar assumed his father's throne and wore the ring of frost. He worked tirelessly to understand and control its magic and he poured all of his attention into late hours at the job. Though he still felt love in his heart, he did not have time to court Arissaha and they drifted apart.

When word came that the ice trolls were rampaging to the west, Ingmar gathered a band of the strongest warriors and set out to exterminate the creatures. Their battles were many and awesome, and the snow turned red with the blood of man and troll. Quivering severed limbs and steaming entrails decorated the icy valleys of Pangaea. Ingmar fought and fought, more trolls than had rampaged ever before, until he stood alone against the creatures.

Bleeding from many heroic wounds and weakened to exhaustion, Ingmar stood atop the pile of dead trolls, victorious at last. He looked into the sky at the setting sun and the clouds seem to darken and turn red with the blood that had been spilt on that day. Ingmar recalled his father and how he had killed trolls and he felt sadness.

Suddenly, there was the sound of a hunting horn, and Ingmar looked and saw a sled team and several barbarians from Wulfgar. He ran to them, glad to see another human face. It was Jobo, the old wise barbarian, too lame and blind to fight any longer, as well as Scordo and Bolmar his young grandsons. 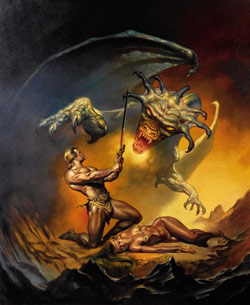 "I have won, brothers!" Ingmar said and held wide his arms to show them his body covered in blood and his bloody dual axes which he dual wielded.

"It is terrible!" Jobo fell to his knees in the snow and Ingmar was forced to lift him up.

"No, it is great," Ingmar said, "the ice trolls will not be back for many years so powerful was my victory."

"No!" Jobo said and his cloudy eyes rolled back into his head. "The mysterious wizard…he came to Wulfgar. He used his magic to strike down the warriors you left behind. He…"

"What is it?!" Ingmar shook Jobo by his frail shoulders.

"Arissaha, my king. He took her to his citadel of ice. He plans to make her his concubine."

"No!!!!!" Ingmar cried and ran off into the blizzard in a mad rage.

He came to his senses many hours later and resolved to find the icy citadel and rescue beautiful Arissaha with her curly golden hair and huge breasts. The thought of some wizard seeing her majestic boobs and naked body filled him with a rageful purpose. He bellowed and shook the clouds.

Many hours later he reached the wizard's icy citadel. It was guarded by an entire platoon of frost goblins, but these were no threat to Ingmar in his rage. He split them to pieces, hacking through them like straw dummies with his great axes. Screams and body parts and green goblin blood flew up into the air all around him as the frost goblins died by the dozen. Each swing of an axe cleaved through another five of the creatures. He stepped on the head of the last goblin and smashed it with a crunch and splatter of brains shooting out.

Then Ingmar threw open the carved doors of the wizard's citadel and stomped up the stairs towards the top. When he reached the top he found Arissaha, imprisoned in a block of magical ice. With a cry he swung his axes at the ice but the blades broke on the surface.

"You will never get her out of that block of ice!" Cackled the wizard as he suddenly appeared from behind a table.

"You!" Ingmar said accusingly. "You will pay dearly for what you have done."

"Hee hee hee," giggled the evil wizard, "I think it is you who will be paying!"

Bolts of ice shot from the fingertips of the wizard and hit Ingmar in his chest sending pain shooting around his chest. Ingmar recoiled, knocking over shelves and bottles full of wizard material.

"Yes," sneered the wizard, "feel the power of magic!"

With horror Ingmar realized the wizard was using his ice bolts to drive him back towards a swirling portal of blue magic. He fought forward a step, but the wizard only intensified his bolts of ice. Ingmar tried to focus the power of the ring of frost.

"Your pitiful toy ring will not save you," the wizard laughed some more, he was always laughing. "I will hurl you into the very stream of time itself and you will be torn apart by the currents of time."

Ingmar could feel the portal behind him, sucking at his fur pelts and hair like a magical vacuum cleaner. He looked over one last time at Arissaha, her face frozen in a look of fear.

"Noooo-" Ingmar cried as he was blasted into the portal.

The currents of time tore at him with magical fingers. Their forces were incredible. It was like being in a tunnel of the strongest punches ever. They pummeled him and battered him. Ingmar resisted. He clawed through the invisible ether, punching back against the very stomachs of time. Another portal yawned before Ingmar. With a grunt he launched himself through it, hoping it would return him to his time.