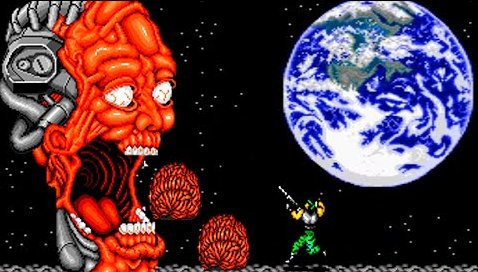 I don't know why I'm writing this letter. Well, I sort of do. My psychologist says that writing can be a useful therapeutic exercise. He says that writing a letter to someone, even someone who doesn't exist, can help one explore their feelings and discover the hidden schemas behind their thought process.

You definitely don't exist. You're the last boss of the 1989 arcade game Midnight Resistance (later ported to the Mega Drive/Genesis, Commodore 64, ZX Spectrum, Amstrad CPC, Commodore Amiga, and Atari ST) - a giant floating head that spits maggots and sometimes its own brains at the player. I'm just not sure why, out of all people, living or dead, real or unreal, 8 or 16-bit, I decided to write to you.

I suppose we do have a few things in common. You live on some sort of space station or asteroid with a beautiful yet desolate view of Earth, its vast oceans and lush continents clearly visible but impossibly out of reach. This mirrors the loneliness and isolation I feel on a daily basis. You also, in the arcade version and several of the home ports of your game, wear a mask over your leering, skinless face, which the player must destroy in order to defeat you. As someone who often hides their true feelings and desires from others, I can relate.

However, I think we're quite different in several ways. Your infectious laugh and ability to spit an endless stream of maggots from your mouth reflect a loquacity I'll never possess. I also don't agree with your policy of kidnapping your enemies' families and making them fight an army of ninjas, tanks and flying robots to rescue them. I can see how some people, especially evil henchmen, might find these traits attractive, though. I guess that's how you became the leader of a massive international drug cartel with its own private military and space station. 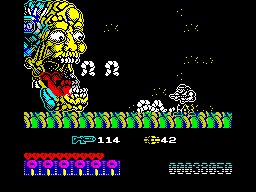 In real life, of course, you aren't quite as popular, not like the Metroid and Contra bosses at least. I think it's partly because you're so difficult to cosplay. My friend Toby and I tried it once, building a 3/4 scale paper mache replica of your head and mounting it on an electric wheelchair we salvaged from the dumpster at a nursing home, but it wouldn't fit through the door of the gaming convention we were attending. We later tried to enter it as a mutant vehicle at Burning Man, but it broke down en route to the festival. It's still probably out there in the desert somewhere, a giant, crumbling sculpture of a flayed human head. A modern-day Ozymandias, mocking the hubris of mankind. I suppose it's fitting that Toby and I are no longer friends; we had a major fight over a girl who was hitching a ride to the festival with us. She was also a cosplayer, but had a weird social phobia that made her only want to dress as those anonymous crowd members in fighting games who cheer on combatants with their two-frame fist pumps. Toby and I were both attracted to her and said some things to each other we can never take back.

Ugh, I'm rambling, but maybe that's the point of this letter, to speak whatever's on my mind. As someone who vomits globs of their own cerebrum at players, you probably understand.

I might as well tell you about another incident I've been preoccupied with lately. It happened just the other day. I was walking down the street and happened to pass a guy I'm somehow friends with on Facebook even though we've never talked on or offline. He glanced at me but didn't say anything. I wasn't sure if it was because he didn't recognize me or didn't want to talk to me or assumed that I didn't want to talk to him, but I didn't say anything either. In hindsight, I wonder what you would have done in this situation. I guess you probably would have floated in front of the guy and spit maggots and chunks of brains at him until one of you died.

I think I finally just realized why I'm writing to you. Because no matter what I tell you, no matter what intimate feelings or embarrassing secrets I reveal, your reply will always be the same: a giant larva or bolus of gray matter. Granted, those are one-hit kills in the game, but compared to the things that come out of people's mouths in real life, they're pretty benign. You'll never judge me, criticize me or tell me you're more attracted to my best friend. You're the one person I know whose mouth isn't a vortex of ugly truths.

Maybe it's telling, though, that your mouth landed you on an asteroid a thousand miles from earth.