Remember when you were a kid and you had to go door-to-door selling your neighbors frozen pizza kits or candy bars or trash bags or whatever? Remember how humiliating it was to see the Girl Scouts just set up shop and make bank while you had to convince random neighbors that what they really needed was a subscription to Guns & Ammo? Well, good news! Comedian/magician/ventriloquist and one-man fundraiser T.A. Hamilton is here to put a stop to the "insane selling" of these and other items! And you can trust him, because he's also a Christian minister!

I thought fundamentalists hated magicians because they hate Harry Potter, but I guess they are totally willing to invite T.A. Hamilton into their gigantic churches as long as he's just performing illusions and making balloon poodles. Plus, he can make them money! Like every other fundraiser, this dude has figured out a way for him to earn huge profits while seeming somehow charitable. As submitter wit says, "he makes it sound like some kind of Ponzi scheme with child labor at the bottom and him at the top." 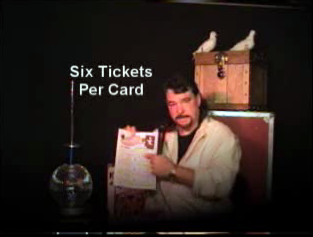 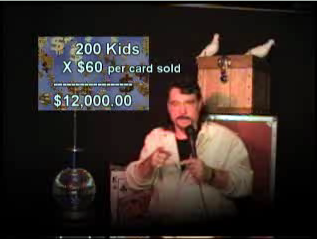 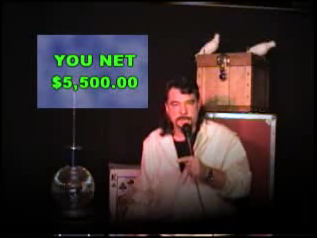 The site offers all the usual goodies: flash videos with '90s effects, animated GIFS, a cool "space" background. As for T.A. Hamilton, he's just a nifty trickster with a mullet, a kickin' stache, and a penchant for performance! Reading about it, it's basically a magic show, but with really awkward prayer breaks. Actually, there's probably a lot of magic you can do while talking about the Bible, but I can't imagine anything that isn't heresy. Will our brave hero be chased out of Missouri by pitchfork-wielding fundamentalists? The only way to know for sure is to check out the site! Or go to one of the ministries and start shouting "witch!" I think that still works.

there is so much on this site to explore, and so little i wanted to see.