That is only one internet comedy writer's opinion, however. And while you could get a second opinion, third opinion, or hell, an opinion for each of your countless chins, I think you'll find the result is the same: you are a completely worthless human being, you have no real reason to continue your wretched existence on Earth, and honestly said existence only confirms that a loving God couldn't possibly exist. Good job destroying organized religion as we know it, msjackie69.

Why are you so vile exactly? Well, despite my devoting an entire update and nearly 11 million words to the issue, I think scholars will still be debating it long after I die of old age and you die from your heart spontaneously turning into Hagen Daas. But I think I have a theory...

You make continual reference to how you make money from these videos right? I'm guessing that's the only reason you do them, since I honestly can't fathom you making an utter laughing stock out of yourself for shits and giggles. So, on the premise that you make these videos for money, you're surely an astute enough businesswoman to realize that people are laughing at your videos, and that they're laughing at them because you're a fat peice of shit with no real skills, talents, or purpose than than to be a fat peice of shit. 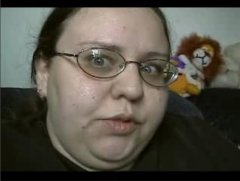 Could God make a barf bag so big that even He couldn't fill it while looking at you?Back to what I was saying about you making money from your videos for being fat, however. You know who else makes money using their bodies and lack of self-respect to get a cheap buck because it's the only thing they're good at? Prostitutes. They say it's the world's oldest profession, but I beg to differ; clearly the world's oldest profession is being so starved for attention that you'll do anything to get people to look at you, and thankfully for you, the market for this job is at an all time high what with the advent of YouTube, so it looks like you don't have to worry your pretty little head about downsizing, but judging from your unkempt, blubbery appearance, I could've told you that already.

So, there you are, msjackie69: your 15 minutes of fame you think you so richly deserve. Now please do us all a favor and fuck off forever.

That does it for another installment of AwfulVision! Tune in next week to see absolutely no fat jokes since I used them all in this article! I'd like to thank Bob "bobservo" Mackey for alerting me to msjackie69's response, and all of you that sent in more videos of her after the last AwfulVision. If you or someone you love would like to submit a video to appear on AwfulVision, send them here and as always, feel free to join our Youtube Channel! Goodbye friends!