Okay, so perhaps you want proof of my jealousy (as if me writing something on the internet wasn't concrete enough proof). When I logged into the Something Awful forums to read what some of our forum goons had to say about the last AwfulVision, fellow columnist Bob "bobservo" Mackey showed me something that would change my life. 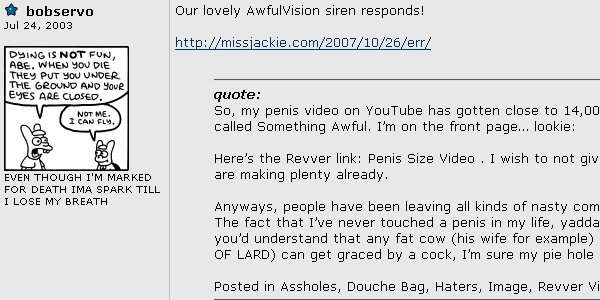 As much as it pains me to relive this nightmare, here is the full text of msjackie69's response:

So, my penis video on YouTube has gotten close to 14,000 hits. All because it was featured on a web site called Something Awful. I'm on the front page… lookie:

Here's the Revver link: Penis Size Video . I wish to not give out the ShitTube link, because those bastards are making plenty already.

Anyways, people have been leaving all kinds of nasty comments about me. I think all of them are hilarious. The fact that I've never touched a penis in my life, yadda yadda yadda. If you've seen Blake's brother, then you'd understand that any fat cow (his wife for example) can get laid. If that tub of lard (and I mean, TUB OF LARD) can get graced by a cock, I'm sure my pie hole has had some action.

I'll ignore the fact that she calls her vagina a pie hole for some reason that is bound to make me dry heave if I ponder it too long and instead focus on her hypocrisy. For the irony-impared, the same girl who posted this video has the unmitigated gall (I could have said she had a lot of guts, but I'm taking the high road here) to call someone else fat:

Of course, I fired back in the only way I knew how: posting an unfunny comment on her blog. If there's one thing I know besides jealousy, it's how to write unfunny things on the internet with the vague intent to mock people with them.

Bam! Take THAT you jerk! I hope my obvious jealousy didn't show through too much. I long for the day when I can have a BMI in the triple digits and post videos of myself dancing around because hahaha I'm fat and fuck y'all you can't do nuttin' 'bout it!

Even msjackie69 isn't safe from being jealous as hell. Come to find out, she's pretty upset about people paying more attention to other fat sluts on Youtube instead of her so here you go msjackie69! All the attention you ever wanted and more! Everyone reading this, feel free to give msjackie69 all the attention she so richly deserves. I expect to see atleast 3000 comments on her video and another 3000 on her blog which, while I'm too nice of a guy to directly link to it, I'm also too lazy to edit the url out of the bobservo screencap above.