For a comedy website, Something Awful sure is read by a lot of people who don't "get" comedy. How do I know this? Simple. Someone actually submitted this video as "bad". To them I say "What the fuck are you? Retarded?" 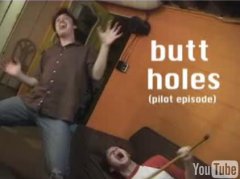 For those of you who hate reading things and watching videos, this sums everything up perfectly.

Actually, the only reason I'm including this is so that I never again have to comb through Youtube to find this video. It is a shining jewel; a paragon of internet humor; this video is one of the - no - it IS the best video I've ever seen. Knowing, as I do, that it was made by one of our forum goons, I can only guess that the person who submitted this is also the person who made it. If so, my friend, you needn't virally market your video. This video should be plated with gold and worshiped by everyone on earth. Sure, Jesus and Buddha and those guys were cool, but did they teach you how to properly set traps, as this video does? No? Then sit the fuck down, newbie.

For you cretins who don't know funny from a fucking hole in the ground, this video is the "pilot episode" of an "internet childrens show" called Buttholes. It stars Andy (aka my hero) and Will (aka my other hero) and is best viewed while on as much acid as the human body can tolerate. In this video, Andy and Will cackle madly, lay traps for each other, and dance. That may not sound particularly funny, but then again I have a Ph.D. in comedy so I think I'm probably correct in saying this is the funniest thing mankind has ever made. I am also high as fucking shit right now.

It starts with our host Andy welcoming us to "myyyyyyyyyyy house haahaahahahahaaaaaaaa" while a screwed and chopped version of Cotton-Eyed Joe plays in the background. For the first minute or so, Andy entertains us by playing with a Wooly Willy game and cackling madly. In fact, he cackles madly for what seems like years every time he says anything. I can only imagine what a typical night on the town would be with this guy.

"Welcome to McDonalds, can I take your order?"

Later, Andy's friend Will shows up and the two get down to business; that is, they lay traps for each other and then sit on them. It is at this point that Will teaches us the 3 essentials of traps. If you have never paid attention to anything in your life, I beg you to start now: 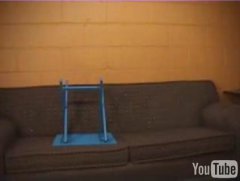 A carefully laid trap.The high point of this video is when Andy sits down on the last of Wills traps and apparently becomes possessed by a demon. I'm not going to give you minute markers for when this happens, but trust me, you'll know when it does. I am not joking when I say it will change your life.

To summarize, Buttholes is possibly the best thing ever made. It even spawned two sequels, both of which are hilarious. So please, the next time you think something isn't funny, remember that I didn't spend 4 years at a nationally accredited internet university laboriously studying internet comedy for nothing so please leave things like this to the professionals.

"This is made of gay and AIDS"
-EricBauman1

"That was the lamest thing I've ever seen and every one of you who thought it was funny are faggots."
-robpness