Sometimes two great tastes just don't go together: coffee and tea, chocolate and meat, and countries that don't use an english alphabet and covering YMCA by the Village People. 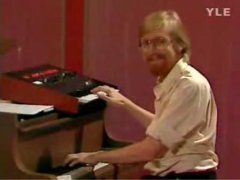 Heh. Heh. I am made of wood. Heh. Heh. Heh.Here we have a video from god knows when (I'm assuming the late 90's since Finland was still mastering fire and the wheel in the late 70's) of Finnish artist "Gregorius". performing, you guessed it, YMCA. The only problem is that apparently Finland uses a different alphabet, and the result is NMKY (which I'm guessing stands for Not My Kinda Youtube which actually describes approximately 100% of the videos I've reviewed over the last few months).

Okay, let's just pause here for a second and reflect on this video. If you're a Finnish artist, why oh WHY would you, out of the literally MILLIONS of songs that exist, pick like one of the 5 that depend solely on the English alphabet? Seriously, Gregorius" could have done any song in the history of human music except YMCA, Respect by Aretha Franklin, I Stand Accused by Elvis Costello, Velouria by The Pixies and some stupid Magnetic Fields song no one has actually ever listened to.

So, of course he chose YMCA. Also, bear in mind that only 2 of those songs were actually in existence when this video was shot. The kind of stupidity we're dealing with here is fucking staggering. 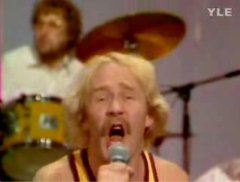 And that's actually not even the half of it. Gregorius and his dancers actually manage to make a Village People song, well, "gay". I honestly wasn't aware that it was possible, but this video has the 2-sizes-too-small track shorts to prove it. Before this video, I was a normal heterosexual male that liked steaks, fast cars, and unfulfilling missionary sex. This video is so gay though that, apparently at some point during watching it, I blacked out, ordered 500 dollars worth of showtune cds from Amazon.com and either sloppily ate a box full of glazed donuts or.........

"Fabulous! Simply fabulous! Hehe, we don't get hot bois like this in America! ;-D"
-AwfulVision