Some lamppost someone knocked over: 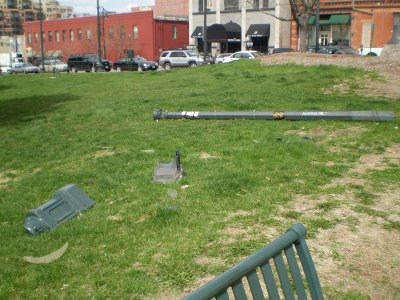 Not remarkable, but then I saw the heartfelt plea: 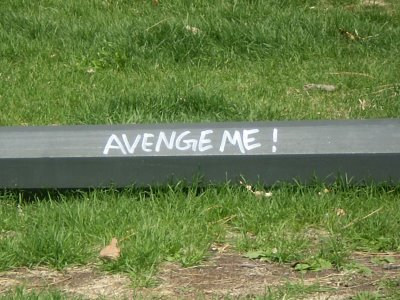 When I was on a break at work once, I watched a women walk up between some cars in the parking lot, turn around, stare me directly in the eyes, then lift up her skirt and squat to piss. All while giving me a cold death stare.

I was walking through a nice park in Glasgow, Scotland one day, early evening, when I came to the foot of a large stone staircase that had platforms at intervals. On one of these platforms, in the rain, were two 20-something guys performing some kind of martial arts routine very gracefully, like a dance, dressed in the appropriate attire, and very good at what they were doing. After a while they just walked away. To walk around the corner and see that in such a striking location, in the heavy rain, was like something from a film, it would have looked amazing on camera.

A man with half his trousers on (the right half) shamble up to a guy and try to eat him. I seriously thought it was the start of a zombie invasion. Turns out he was just a local smack head.

A very, VERY fat man standing up suddenly, running over to a nearby drunk, grab him by the head, and shake him yelling "The power of Christ compels you!" - This was at a restaurant, and no, they did not know each other before hand.

I rode next to a crazy woman on a bus who had a flawless 3 hour conversation with herself, put a cellphone in her hands and you would have thought she was completely normal, but no phone, crazy, interesting how much difference that can make. I think she noticed me staring because she offered me some peanuts. I refused.

I once saw an older gentleman running along the sidewalk barking at passing cars after midnight. Werewolf? You decide.