In Seattle, I was entering the Amtrak station when I happened upon a homeless man loudly praying to his hat. He had it perched on this pedestal thing. It was a regular old ball cap that had "Jesus" embroidered on it, with a bunch of little buttons and pins. He spoke in gibberish. I dug through my bag to get out my camera, but he finished before I could get my camera out, so all i got was a photo of his "altar". 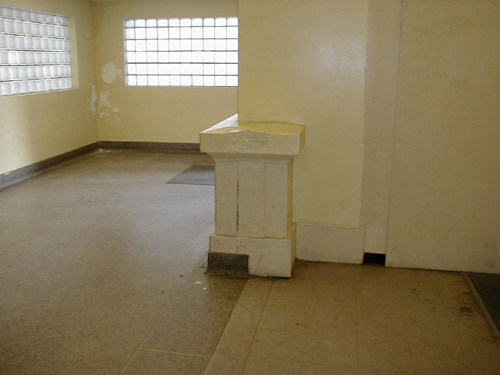 When I worked at a vet a woman brought a kitten it with half of his tail missing. The cat didn't care much but the woman was freaking out. She had the piece of tail left - a little black inch-long fuzz with a long white string on it.

She held it up, crying, "Stupido el GATO! STUPIDO EL GATO! KITTY HIT ITS HEAD!" over and over. She wasn't even Hispanic. I was laughing so hard I was crying and when she asked what the white string was and my co-worker told her it was part of the spine I laughed even harder.

In Union Square in New York I saw an anorexic-skinny black guy in nothing but short-shorts and 80s-style high-top sneakers, slowly jogging laps around the park. He had full drag queen makeup on his face and had written across his back in green glitter, I GIVE ORAL EXAMS.

Also in New York, two bums having a shoving match about which one of them was worse off. I couldn't really understand most of what they were saying, but I heard one say 'Well, at least you have a box to sit in!'. Every time one guy said something, he'd shove the other by the shoulders, and then just stand and wait for the response and counter-shove. If they had been more intelligible, I would've suspected that it was some sort of strange performance art rather than an actual dispute.

I saw a black midget with dreadlocks riding a skateboard. He looked old but was tearing shit up as he grinded by me as I walked into work.

Nice to start the day with a good laugh.