Tony Stoogans (Adam Sandler) is a loveable slacker who dreams of being a clown like his famous grandfather, the Great Stoogini. Things take a turn for the wacky when Tony loses his job at the local Subway restaurant for "clowning around on the job" to impress the woman of his dreams (Cameron Diaz)

*while making her sandwich he uses a tomato for a clown nose, bread for clown shoes and wiggles a sausage around suggestively between his legs while flirting*
"can i get some salami on white?"
"*little boy voice* You can have my spicy salami any time you like miss Angela Kupperplatz."
"*she laughs and flirts* How about some olives?"
"O-Love you too miss Angela"
"WHAT THE HELL IS GOING ON IN HERE *record scratch*

Tony's boss (Tim Meadows) sends our hero-making hero out on his ear!

"AND TAKE YOUR JUNK WITH YOU!"
*Tim throws a rubber chicken, some giant shoes, a fake turd, and several cream pies at Sandler, who takes each one to the face while nodding dejectedly and doing that weird smile thing*
there is a beat
"... and take your grandfathers stupid clown trophy too!"
*Giant trophy with bronze rubber shoes hurtles out of the subway restaurant and hits Sandler in the junk, He screams, trophy then smashes on the parking lot pavement, Diaz looks on, obviously upset.
Sandler looks down at the broken trophy and back up into Tim Meadows eyes with determination*

"I'll show you Mr.Smitherman, I'll become the funniest entertainer in the whole wide world!"
"Get off my property you damn honkey slacker!"
"I'll show you, In a week I'll be the biggest clown since bozo, then we'll see who the slacker is!"
"HA! I bet my lucrative subway franchise that in a week you'll be begging me for your old job back. I bet even Trash-Can Timmy (Rob Schnieder) could take your place!"
"I'll take that bet, FRIEND - if I win, I get the restaurant!"
"and if you lose, you have to kiss trash-can Timmy right on his nasty butt! AND he'll get your old job"

(trash can timmy pops out of a garbage can with a fish bone in his hair and a soiled pornographic magazine and remarks in a horrible Mexican accent) "ah som-bahdee say-ah my name-o? *he farts and the sombrero shaped trash lid he was wearing like a hat flies into the air because it was a large fart with much force*
"make it a week and one day, and you got yourself a DEAL SANDWICH MAN"
*they shake
*sandler gets into a tiny clown car and peels out of the parking lot.
(trash can timmy slyly remarks to himself)"eef toh-nee lose, then I-ah Ween!
*la cucaracha starts playing and he dances in his trash can
*the sombrero-lid falls from the sky and crashes noisily on his head, shutting the can
"aye caramba!

*Dejected, but full of resolve, Tony lounges around his house in sweatpants and giant floppy shoes that squeak when he walks. the shoes have a REEBOK logo on them that can be seen at all times.* He sits on his couch watching a Cubs game and enjoying a refreshing coca cola, when the doorbell rings. It's Tony's neighbor, John Wayne Gacy (Kevin James) looking to borrow a shovel. John notices Tony's shoes

"nice 'Boks. you know, I do a little clowning myself, maybe I could show you a few moves"
"YOU were a clown John?"
"Oh yeah, one of the best. whenever I was on I KILLED"
"Haha, wow, what other skeletons have you got in your closet big guy?"
"oh wouldn't you like to know *winks at audience"

And so John takes Tony under his wing, teaches him the ups and downs of make-up, pratfalls, and how to access one's "Inner clown", and maybe a little something on how to win over the ladies on the way.

*montage of Tony throwing pies, putting on lipstick, kissy-facing the mirror and high-fiving John, the two of them practicing slide whistle when a pretty blonde walks by and they do the boner noise and it's funny because they have boners in their clown pants. trying to jog on a treadmill in clown shoes and then falling off and getting shot off the mill into the popcorn machine while TCT peeks at them from random trash cans around the city and in their homes,trying to sabotage their training.

"I've never gone all the way with a clown before"
*tony raises his eyebrows and reaches into his pocket and pulls out a long rope of tied together hankies, at the end of the hankies is tied a pair of skimpy black panties and matching bra
*he bites his lip and nods
*she looks down then up in surprise and delight to realize she is somehow naked
*exterior shot of tiny clown car on make out point bouncing up and down with one hand visible on the steamed up window

*Gacy walks into a mens room and takes the middle urinal between a biker (chris rock) and a bookish rich guy (david spade), leans forward, and his lapel flower squirts a steady stream into the urinal as he makes a goofy relieved face, the biker and rich guy shoot each other sideways glances as he jiggles out the last drip and farts
"aaaah"

(tim meadows boss) "I want all the dirt you can find on stoogans! leave no rock unturned!
(TCT) "but boss, that'sa no dirt, that's a my DEEE-NER"
*shot of trash-can timmy with a knife and fork and a dirty bib with a picture of a garbage can on it about to chow down on a big pile of dirt

*Gacy finishes chewing on a human hand
"BUUUURP"
*He throws it over his shoulder into a garbage bin.
"ow ow ow aye yi yi"
* TCT peeks out holding his sore head and the gnawed on human hand
"hey, you going to ah fee-neeesh theese?"

"I can't beleive I actually made it, the international clown-off, I better not blow it"
*pov shot of the audience
(Gacy) "slaughter em Tony!"
(love interest) "watches intently, nervously - holding a "go tony" sign
(grandpa's ghost) "YouuuuooooOOOOoose the Seeeeeeeltzeeeeeeer anthoooooOoOony"
(chris farley's ghost) "holy schnikies! *old footage digitally cut into the film
(trash can timmy) "hey clown hombre, you're go-ween'g to bomb! pucker up *waves his stinky butt in the air, there are stink lines and all the other audience members look like they are going to puke, even the ghosts* 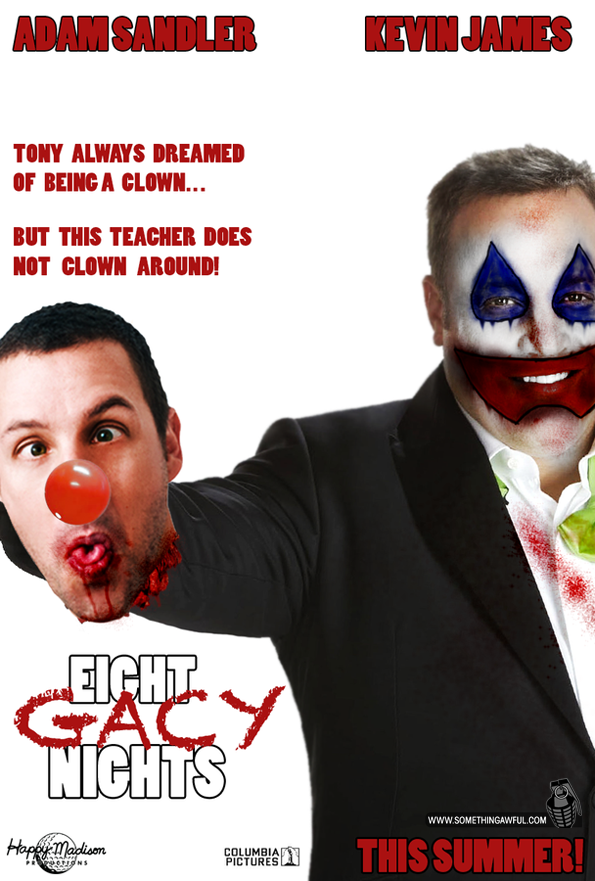