Remember Google Glass? Haha what a New Coke-style fiasco, it's a good thing they abandoned that embarrassing plan almost immediately. But I'm glad this ill-fated 'innovative' product briefly made headlines, because it inspired Tip to Photoshop trail-blazing cyborg Steve Mann. This, in turn, restored relevance to the classic FYAD thread about Mann's July 2012 misadventures in a Paris McDonalds. So let's revisit that incident - read about it here to refresh your memory or learn about it for the first time! - then we'll flash-forward to those recently posted Photoshops! 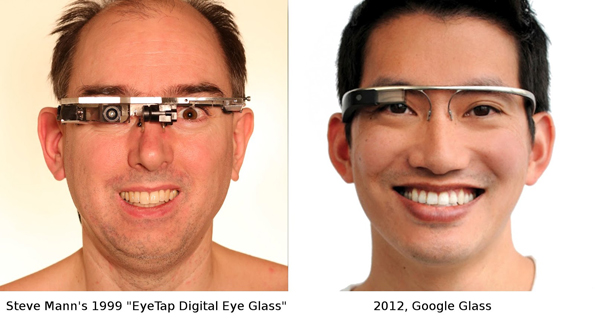 the french translation part of his doctors note just says "This guy is an homo lol, look at that robot eye thing. if hes eating mcdonalds take his Mango Mcflurry using a flurry of punches"

Revealing Mistakes
Steve Mann pissed himself really bad, in public, and everyone could see it and it broke his iPhone

Factual Errors
Steve Mann refers to himself as a cyborg. He's actually just a gay weirdo with a webcam.

Perhaps the most egregious plotline of Parisians, Woody Allen's latest & his second love letter to France's capital, involves Andy Garcia--here wearing some absurd computer device over his eye, unexplained--being attacked in a McDonald's restaurant and pissing himself in fear. The rest of his scenes, largely without jokes and randomly interspersed between the Nicholson and Fassbender plots, recount drab details of his lawsuit against the franchise.

Bonjour... Ineed your clothes, boots, and two Ranch Wraps, one burger, and one mango McFlurry

i went back to the table and i took my first tentative bite of the ranch wrap, checking in my peripherals to make sure i had the attention of at least one witness. the crispy chicken cut into the roof of my mouth and i cried out in pain, i turned to my family for support only to find that they had been replaced with perpetrators 1 and 3 and a mango mcflurry. i scanned the restaurant frantically for perpetrator number two but i knew somehow that he was already long gone, and my family and my mcchicken with him.

By that point i had come to understand that there was no perp 2, there were just 2 guys labeled perp 1 and perp 3 to trick me and now my ranch wrap (hereby refered to as good eats) was cold

I would have gotten away with it, too, but my screensaver came on right when I was about to elude possible perpetrators 2-7, 9

The perpetrators were moving about so quickly that they became difficult to track, let alone number, and my computer glasses became so overheated trying to evaluate their movement patterns that even the chill of a delicious Mango McFlurry could not cool my sweaty brow

We received our food from the cashier, who i will refer to as "the hunter." i was then approached by the first perpetrator, who i have named "hugo van der goes." outside, the whole incident was witnessed by "mr slip and slide." perhaps i should have developed a more coherent labeling system for this recollection, but "c'est la vie" as they say in the land of ranch wraps.