Feel free to skip this page if you don't care about people pooping on consoles (that aren't even GameCubes)! Also, if you do, because I didn't include pictures. I, for one, have already moved to page four. How did this content get here?

So, for some reason, scavenger101 decided he would allegedly take a bunch of laxatives and then allegedly defecate on a Dreamcast, which he would then discard by tossing its debased shell out the bathroom window. 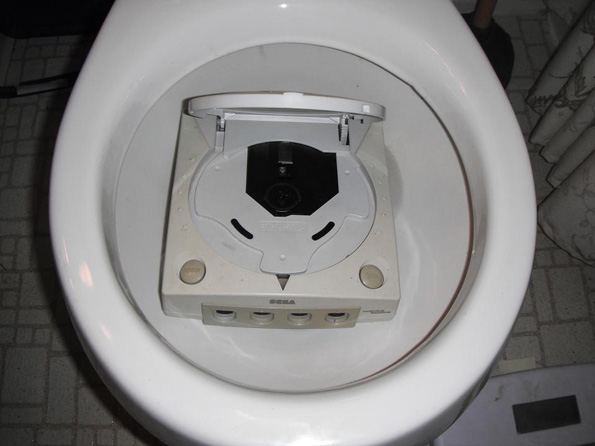 "This what happened to Elvis. Exactly. Except he was trying to shit in an Atari."-- Gilok

"If you didn't poop on something an orphaned child would love, you've failed" -- Jam With Seeds

"You should poop inside a gamecube disc tray and then close it next time." -- Blunt Force Trauma

"And when you press power 'Duke Nukem Forever' comes on." -- Grant DaNasty

(Of course I am not linking to this "evidence," but imagine (if you must) what looks like a can of chili poured onto a Dreamcast in a toilet. Actually, the prevailing theory from the ever-skeptical Goons is that it was in fact a can of chili.)

A COMMUNITY UNIMPRESSED (NOT FOR THE NORMAL-PERSON REASON, THOUGH)

"Say no to shampoo, demand real poo! We'd best have an independent team of fecaI scientists look into this." -- Reptoid Democracy

"The splatter is not consistent with normal Diarrhoea splatter that I would expect to see; there is a solid concentration of kidney beans in the back right corner of the console, this isn't what we'd expect to see. If you had genuinely shit this, the splatter would be less concentrated on the console, with general liquid spray around all the perimeter of the dreamcast. In the outdoors shot we can see there is no splatter on the lid of the dreamcast, this is not consistent with being shat on in the photographed location." -- Crankit

"I don't care how much of it you eat you don't shit baked beans. There is nothing I hate more then fake shit. Nothing." -- shotgunbadger

"You are going to have to pick that shit covered dreamcast up from your back yard, bring it back through the house to the bathroom, and poop on it again, or the internet will laugh at you." -- Sir Jebus

"Why bring it back inside? Gross." -- Roosevelt


An anonymous insulting-avatar-buying Goon got the last word: 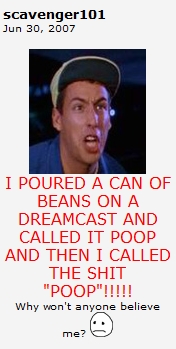 Postscript: Remember Ranccor, the bad speller from page 2 who was late to the GameCube lunchbox bandwagon? Well, he shat upon a PSP. He really did; there was no debate. Ranccor, he'll do anything! Keep that in mind for now.