JUMP IN AT ANY TIME, DEATHTRAMP, THESE ARE GOOD TOPICS

"Mod it like a Portal Companion Cube. Here let me photoshop it..." -- The Fuzzy Hulk 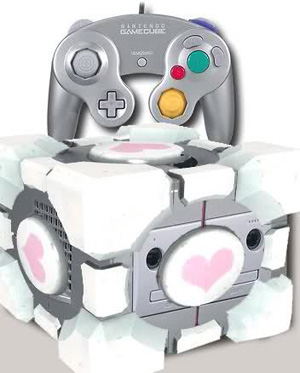 "Have it buried with you Egyptian-tomb style for future civilizations to find." -- Megafunk

"Cut a piece of sliced ham roughly the size of a gamecube disk. Put it in the cube and attempt to play it." -- Shavnir

"Ruin its childhood with your drinking" -- Cameron

"Make it a lunch box and be the coolest kid on your block!" -- Fist Killinghammer

"Keep the little mechanism that makes it open slowly in, though. Maybe pack a little dry ice in with your lunch so when you open it it's like you're eating a salami sandwich you stole from a government lab."-- Flavor Bear

"Hollow it out and give it to a turtle without a shell." -- Insensative_Asshole

"Let poor/dying kids watch you play it but refuse to let them use it. Show up to a donation place with it and tell the kids to quit being whiny pan-handlers and wait for the trickle-down to start working. Say you're going to donate it but mail them a gamecube-shaped box of ham disc gamecube games instead." -- gleep glop

"Spend your horrible life with it" -- Niccy Bones

"Toss it out the window as trash, wait for the native american to show up and cry over it. Capture said american. Ship him to the UK as a curiosity from the colonies. Make millions." -- lenoon

"Play killer7 or wealth of other quality games

"Remove the insides, and put it in a tree for birds to nest in. Take pictures when they poke their heads out of the holes left by the removal of the controller ports

At this point Gravy Jones intervened with a simple moderator challenge: "Do one of these funny things and post the results or I will ban you." But DeathTramp didn't immediately respond, so the advice kept coming:

"Backtrack to an earlier part of your life and use it to open that locked door. You know the one I mean. That mysterious door you found when you were a child. It was locked by an elaborate sigil with a square hole. You always wondered about that door, didn't you? You can get through it now. It will be a magical adventure." -- Blurry Gray Thing

"Grow a watermelon it. Make a cube watermelon." -- OdB

At this point, the suggestions suddenly devolved until they reached a proposed sequence Bloodfart McCoy christened "toilet, bong, sex hole."

Screaming Idiot pleaded for a return to reason: "Give it to a needy child, that's what I did with my NES a few years back. That little girl's family didn't even have cable, so she was finally happy to have something to do to keep her away from all the bad stuff outside."

"Do this, but only after you toilet bong sexhole it." -- Gilok

This next one might not seem especially important, given that it boringly restates an idea that's already been addressed a couple times, but take note of the misspelling, it is FORESHADOWING:

"This would make an exellent lunch box for work or school." -- Ranccor

Oh good, DeathTramp finally returned, now she's going to do one of these cool activities people came up with and -- oh. "I'd like to open this up to a vote. Either I donate it to charity or I throw it off a building onto the pavement."

"Throw it off from an orphanage." -- Tom Funk

"Dress up as a cavewoman. Make a video of you approaching the Gamecube in confusion. Slowly build up the confidence to touch it, and when you do, look like you just got a great idea. Pick up the Gamecube and throw it into the air. Then splice the footage of the tumbling 'cube with a Borg cube. Make sure "Also Sprach Zarathustra" is the soundtrack." -- Test Pilot Monkey

gnarlyhotep: "After hearing about how durable these things are, I'd like to see how much weight they can support. I suggest driving your car on top of it, like this 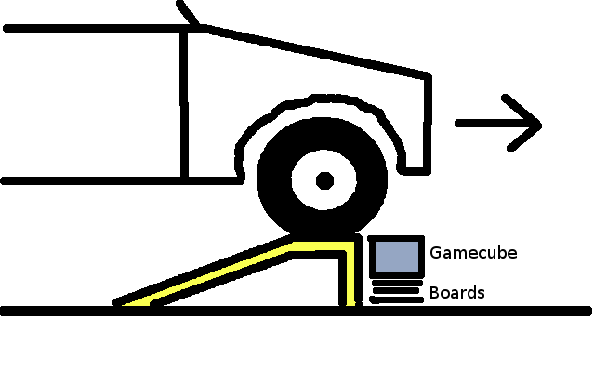 If it can handle that, then you can start adding more weight inside (or on top of) the car. Make sure to find out how much your car weighs first!"

Finally, esteemed Hulk Hogan Meat Shoes manufacturer dinozombiesgoRARR weighed in with several practical, ingenious options. Savor them like foot-warmed jerky, because they're the last shred of sanity this saga has to offer.