town crier reading this month's balance patch to the gladiators

This week in the Goldmine BYOB is back at it again, imagining patch notes for an unseen ancient Roman gladiatorial video game. There is no additional perspective I can provide on that premise, it just is what it is.Obscurum per obscuris! This thread was started by Yinlock on April 11, 2020.

- crit rate for tridents has increased from 5% to 5.25%. after some discussion with the test team the attack speed has also been reduced from 18.9 to 18.6 to maintain balance

- undid the ragdoll physics fix after lots of community feedback 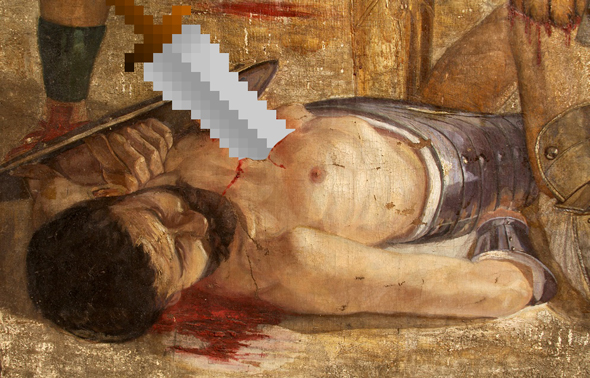 - Myrmidons have a new Charge Attack where they can Charge forward, then Attack.

-Resolved an issue where lions were incorrectly spawning in spectator stands.

-Lions will now chase everyone, regardless of religious affiliation- in accordance with the Prophecy

*DO NOT INSTALL THE "NAVAL BATTLE" UPDATE. IT WILL CORRUPT YOUR LOCAL DATA*

- hafted weapons will now break when sufficient weight is applied to them -- no more spear ladders in order to go fight the spectators!

- spectators no longer count toward your k/d ratio. spectator kills do not count towards the "trail of corpses" and/or "river of blood" achievements. what is wrong with you people

- You can no longer dual wield with one arm.

- Female lions no longer have manes.

- "Flesh tone" color renamed to peach. (Insensitive either way) there are now a plethora of tones to choose from

- Fart emote no longer has knockback (it was being abused.)

-Genital size slider is now limited to 100% as originally intended.

- Fixed a glitch where gladiators could sometimes win against caesar's bets

- Fixed a bug where Cestus (the gladiator class) and Cestus (the fist weapon worn by the Cestus class) were not properly differentiated in the code on the equipment menu. The infamous Pyramid of Pugilism can no longer be performed. 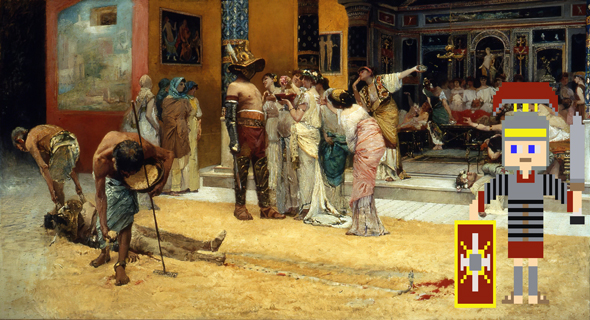 The final two gladiators doing a "squat off" challenge after defeating the other players in free for all games is insensitive to those who are waiting for the game to end so they can respawn. A timer has been added which will force a reset when only two players remain

Number of squats within the timer is NOT an allowable 'mini-game.'

Due to a large number of customer service requests, players interested in doing a 'squat challenge' can now do so by selecting it in the game menu. Due to coding issues, please note weapons will still be weldable. Please refrain from damaging other players.

"Hardcore Squats" mode, where damage is allowed while also trying to do squats, is now an optional game mode.

- Equipping the Bocca della Verità artifact now properly affects the maim rate against opponents who have engaged in any lying based activity.

- We are investigating an issue where players can't find Tiberius in Rome to get the Emperor quests. In the meantime, as a workaround, players can find a backup Tiberius NPC by entering the ocean and swimming south to Capri.

- Due to persistent problems with Tiberius not loading in Rome and general player dissatisfaction with needing to swim for an hour each time they turn in a quest, we have released a new Emperor NPC, Caligula, using a new, experimental goal-seeking AI. He can be found in the Imperial Palace as usual, but may wander from room to room depending on his goals! Have fun!

- We are investigating reports of the emperor aggroing on players, killing other NPCs, and locking quest NPCs in the palace.

- The goal-seeking AI, and Caligula, have been temporarily disabled while we debug them. In the meantime we've temporarily assigned the Emperor dialogue and quests to another NPC, Claudius -- he can be found in the Praetorian camp on the west side of the city. Please be patient; this should only take a few days.

- The Christmas and Chanukah events have been replaced by a single generic Holiday event, not out of any sense of political correctness but it was becoming far too easy to earn the Persecutie and Ben-Hurf de Durf achievements by targeting participants.

-Gauls will now only become indomitable at lvl 40.

-Correct sound file now plays when the Emperor gives a thumbs down.

-"screaming_chimp.wav" has been removed from system files.

- whooping_chimp[1-16].wav have been added to the sound files. Chimp vocalisations are now more representative of their full range.

- added support for hieroglyphics in the graffiti options

-Boadicea wheel spike damage reduced so it is no longer a one-shot dismemberment.
Base jump height reduced so the player can no longer jump to avoid them without putting points into vaulting. 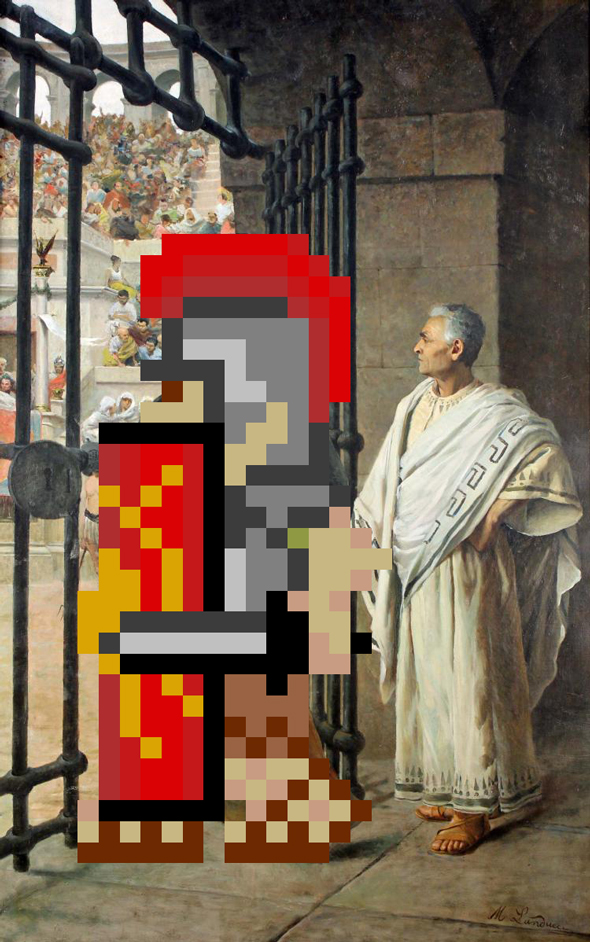 - fixed bug in the Capua Ludus where players can skip the tutorial and grief spectators
- VAC banned 6000 players who abused this glitch. their accounts are available to view on the Appian channel

-Whips now do bonus damage against players who have not "liked" a Cicero post in the last 24 hours.

-Issue where barbarian invasion irreparably crashes game and corrupts install on some operating systems remains unresolved. May have to port to a new OS.

-Update on the barbarian invasion crash: Changing region to EAST and language settings to GREEK seems to resolve issue, at least temporarily

- placed all players back into their cells after the emperor freed them all in yesterday's event, we hope you enjoyed April Fools!

- Charioteers can no longer cross-class the gladiator skills that provide animal companions. The big cat ai is incapable of distinguishing between friendly and hostile horses and it was ruining the races for others.

- fixed animation bug where NPCs caught in Mt. Pompeii's eruption would get stuck jerking off forever

- Explosives regional update available now. Only in China for the time being while we A/B test.

Thanks again to Yinlock and the goons for this oh-so romantic update! Join our madness today; castigat ridendo mores!