The network's graphics operator has never updated his antivirus software. No one is any the wiser. *Infographics, player stats, sidebars, and spinning logos mingle with a partially obscured LiveJasmin window and free smiley downloads*

*the scene fades in as we see the team huddled tight above us, we are picked up as the viewer comes to realize our perspective as a go pro mounted on the back of a football. The snap. Bone-crushing hits and gutteral grunts flood in from all directions as we float freely, the video playback slowing to emphasize our momentarily weightlessness. Back into the mud-caked hands of the QB. A brief hesitation followed by the quarterback throwing a perfect spiral and the entire audience is collectively overcome with motion sickness or triggered into photosensitive seizures*

*A man in a toga sows a field from a basket of dragon teeth. Overnight, the teeth sprout into fully grown and game-ready basketball players. The toga man nods in satisfaction as the basketball theme blares and the words MARCH MADNESS materialize between two freestanding Ionic columns* 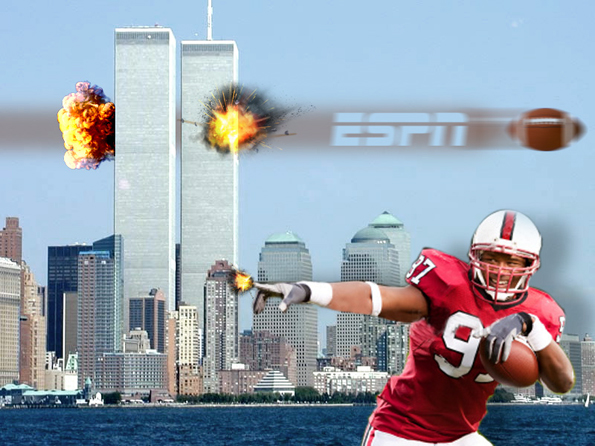 *A 20 sided die the size of a bus bursts through a brick wall and tumbles to a stop in the center of a field. It lands on "20"*

*The numbers flash and the seams begin to glow. An alarm blares and the die unfolds to reveal a group of fierce of warriors standing inside. Freed, the warriors let out a battle cry and charge down the field where another die is just visible through the mist*

*The two groups clash in the middle and battle is joined in earnest. The camera pulls back for an aerial view and the carnage spells out "NATIONAL LARP CHAMPIONSHIP"*

A man stands tall atop a mountain of corpses, flanked on every side by heavily armoured soldiers, their guns ejecting flame and death in every direction. The man holds his hand up and hurls a set of dice from the pile. Thunder strikes and explosions erupt as every die settles, impacting themselves into the skulls of orkish thugs assaulting the corpsepile and disappearing into ash.

Behind the vignette artillery rips the earth asunder while the bespectacled man throws up his arms and roars in triumph. A spiked metal marquee bursts out of the ground behind him to loudly proclaim the commencement of the 12th annual Warhammer 40k tabletop championship.

The promo passes and we return to the game, where a 400lbs man is having a heated rules argument with a 13 year old boy.

Thanks to Applewhite for the theme, to the SA Goons for the posts and to Palpek for the images!