A bunch of guys in rival team jerseys are seated around a table at Buffalo Wild Wings. They are all getting along and laughing together. Meanwhile, a buxom blonde in a white toga enters the restaurant. She sees the display of inter-fan camaraderie and her cherry red lips twist into a mischievous smile. She approaches their table and produces something shiny and golden from the folds of her toga. The fans' jaws drop in awe as she places the object on the table. It is the superbowl trophy. On it is the inscription "To the best football team of all time."

The fans' earlier friendship is shattered and within seconds they are at one another's throats, tearing each other apart in a grizzly display of barbarism. A spray of blood splatters across the woman's toga, marring its perfection. She takes a daub of the blood on her fingertip and sucks on it suggestively. She smiles at the camera. The woman is Eris, goddess of chaos, and she is pleased.

*Heavy safe smashes a pile of cinderblocks. Unlocks with the combination F O O T B A L L. Inside is the Superbowl XLIX trophy*

*A red orb navigates a series of spinning turbines before slamming between the letters "SC." The letters are made of carbon fiber.* 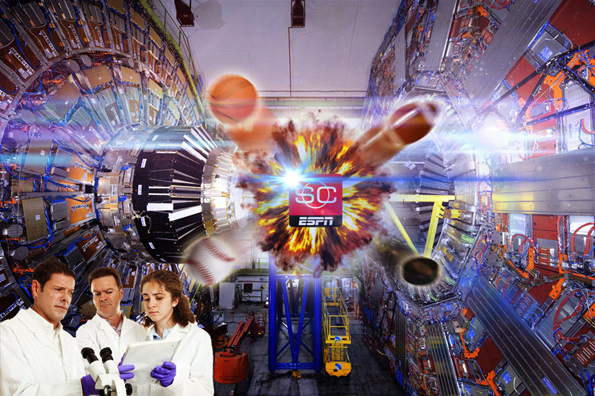 a team of scientists is operating the large hardon collider. they have discovered the primordial particles, the smallest units of matter that compose everything else. they are impossibly tiny versions of a basketball, a football, a baseball and a hockey puck. the scientists smash them together, creating an explosion rivaling the big bang. galaxies and stars explode in all directions, revealing the sports center logo as the center of the new universe

A proper Victorian lady and her chastely amorous suitor stroll arm in arm down the winding path of the meticulously sculpted lawn. She giggles nervously and coquettishly twirls a lace parasol, which shades her perfect milk-white visage from the noonday sun, making the gentleman's heart leap. The 3rd-and-25 pass comes rocketing over the outstretched arms of the gardener as the proper Victorian lady pushes off from the gentleman, makes a miraculous one-handed grab while clutching the parasol in the other hand and lunges for the first down.

The gentleman raises his arms looking for a offensive pass interference flag.

The proper Victorian lady spikes the ball in the area of the gentleman, grabs her crotch and gyrates her hips in celebration.

*Wizard stands against giant monster. He strikes the earth with his staff and there is a flash of blinding light and a cloud of smoke. The smoke clears but, to the wizard's shock and dismay, the monster is still standing! Its lips peel back in a grotesque sneer.

A hand gently tugs on the wizard's sleeve from offscreen. The wizard looks over and sees a caddy standing next to him. The Caddy draws a Gripflex Drivemaster 3-wood from his golf bag and offers it to the wizard, who accepts it gladly.

*Monster watches with dismay as wizard tees up*

*it is the future, and Football robots roam the ruins of civilization, charging through decaying buildings. One spots a human moving in the debris. It locks on, and hurls a steel football while a voice like a fork in a garbage disposal screams, "ARE YOU READY FOR SOME FOOTBALL?!"

The steel ball hits the startled human in the chest with the sickening sound of crunching ribs, his lungs collapsing as the ball embeds itself into his chest. The robot stomps over to retrieve the gore-covered ball and shakes its head; this one was not ready.

Suddenly a column of light appears on the horizon, and the robot, along with all the others, converge on it. It is coming from an immaculately maintained stadium, the crowd made up of other football robots.

As they cheer wildly, a group of humans that were deemed ready for some football are marched into the field. They wear the tattered, stained remnants of old football uniforms and squint into the lights as they survey the crowd. Many are injured from being clipped by the steel footballs.

The other team takes the field, the most advanced of the football robots. They tower over the humans, eyes glowing red and menacing spikes on their shoulders and boots. Several have football cannons in place of at least one hand. Their uniforms bear no numerals that humanity ever created.

A small, wheeled referee robot enters the center of the field, letting out a sharp whistle before quickly retreating. The massacre that follows is blessedly quick as the humans are utterly demolished. Trampled by the robots or blasted with more of the sharpened points of the steel footballs, their broken bodies are soon removed by maintenance robots who save the uniforms for the next "team" and clean up the field.

One of the player robots looks skyward, wondering when and where they will find a worthy challenge. It turns to a shape on the horizon, which we see is a football shaped spaceship on a launch pad, football robots constructing it to find other races that may be ready for some football.