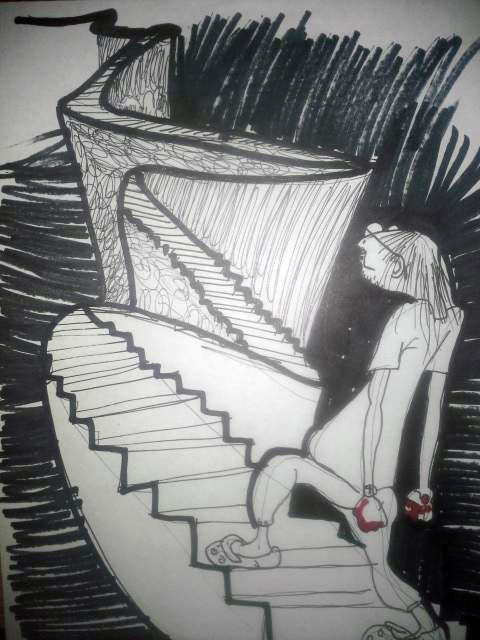 As I walked to the stairs I glanced down at my own hands, which now bore the same tattoo as the severed hands attached to the mannequin.

"What could this all mean?" I asked myself in a hushed whisper and plunged my hands into the roomy pockets of my sweatpants.

Before I attempted the exhausting ascent by stairs to my apartment like some modern day urban sherpa, I realized I needed energy... fuel. For my body. It craved sustenance for the task before me.

Sadly, in my haste to flee the room earlier, I had left my pitcher of Soylent in the minifridge, and I was unable to answer its viscous siren call. I began to tremble with the sudden realization of my plight, and also from low blood sugar.

All the while the birds incessantly beat upon with windows without ceasing. They beat on the windows with their wings, beaks, talons. They slammed their bodies into the glass, a mass of black feathers and gore acting not as a disorganized collection of bodies but as one unified whole.

I clutched my ears with both hands, desperate for silence.

My father once told me "What are your long term plans?" and "Your mother and I think it would be good for you to get a job and live on your own for a while" and I have often used his hurtful, abusive words to my advantage. Repeating them over and over, absorbing the pain and transforming it into power. I could feel my energy levels go up as I chanted, silently at first and then slowly rising into a triumphant shout!

"How is THIS for a long term plan?" I shouted to the birds and to my father.

I dropped to my knees and began crying.