When Matt and I were still friends, we would hang out at the local game shop "The Panther Den" on game night where everyone could bring their favorite game to play. We brought Munchkin, which was always a crowd pleaser.

I'll never forget the moment when Starlight walked into the Den. We never learned her real name but Matt and I always called her Starlight.

She was older, maybe upper thirties, lower forties. But you could tell she spent a lot of time at the gym and other places where ladies go to stay in shape. She had a bottle of muscle milk in one hand and a cell phone in the other and she was wearing those tight pants like they wear in Men in Tights. Her long blond hair cascaded in voluptuous curls, the kind you see in shampoo commercials or on golden retrievers.

She walked exactly the way I'd always imagine a woman would walk if she were to walk into the Panther Den, hesitantly, yet curious. I'm sure she detected the strong odor of masculinity that filled the room. This was a place that was populated by men, men who used their intellect, not their brawn to solve problems. These were men who could be there for her, who could meet her needs. Not like the dumb jocks she had always known.

She glanced my way, her eyes drawn to me my the laser-like glinting of the florescent lights off of my spectacles. I don't know what went through her mind in that electric moment, but I am sure she felt the same thrill of excitement that I felt.

The room went silent, as one by one we looked up from our intellectual pursuits and gazed upon this angelic visitation.

Her eyes left mine and flitted back and forth across the room, searching, seeking. What does she seek? Who does she seek? Does she desire a man to rise from his deck of M:tG cards and join her at her side? Could I be that man? Did I have what she needed.. what she yearned for? Could I be the one she sought?

A young man named Brian stood up, "Hey mom, I'll be right there" he said, grabbing his Skull the Troll dice bag. 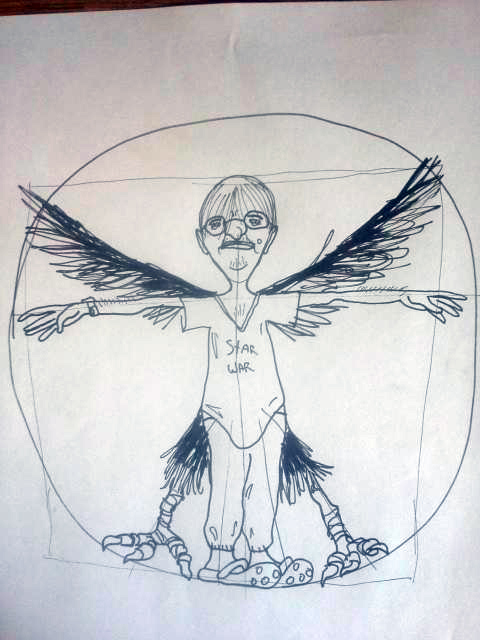 A bird flew in through the front door, let out an ear piercing screech and alit upon an ancient CCTV monitor mounted to the wall that I had never noticed before until the moment that the bird flew into the window and landed on it.

On the monitor I could see a grainy image of my apartment, I immediately recognized the video as that from a hidden spy cam I had wisely installed months before that was disguised as a clock that has hands that turn in a circle.

On the screen I could see Matt, inanely puttering about the apartment, a foul string of blue language flowing from his maw.

The final piece of the puzzle had fallen into place. I knew what I must do. I knew what I was born to do. It all made sense. Matt. My Father. Starlight. Brian. The birds. the mannequin. I hunched my shoulders in a very masculine fashion as if I was in a detective noir video game, and I placed my foot on the first step of the stairs leading to Matt.