I've never seen childbirth but I have made several edits to the wikipedia page on it and I can confidently say that while it is a miraculous and beautiful process, it is also long and somewhat strenuous. In many ways, my ascent up the stairs was exactly like childbirth only I was both the mother, AND the infant being forced through the birth canal.

It was also a lot like being a reverse 9/11 victim who instead of falling out of the twin towers to my death, I was falling upwards to new life.

My breath became ragged and my legs shook with fatigue as I climbed step after step. I dared not look to one side or the other for fear that I would topple head over heels into the abyss that surrounded me.

The darkness below was a deeper black than I have ever known and as I climbed higher, it climbed higher with me. The darkness shifted and writhed and consisted not of shadow but of the tangled and twisted bodies of millions of coal-black birds.

After hours of climbing, I reached the top of the stairs and stood before my apartment. I raised my tattooed hand to the door, balled my hand into a fist, and rapped my knuckles against the surprisingly spongy wooden door.

After waiting a few moments and receiving no response, I dramatically whipped the door open by turning the door knob and opening the door quickly. The speed with which I did so astonished me.

Matt stood in the center of the room, jaw agape, eyes glazed. His arms ended in bloodless stumps instead of ending in hands as I was accustomed to. A faint hissing noise was coming from his open mouth, as if he was letting out a long, quite breath. The floor around him was covered in dirty laundry and GI Joe posters. 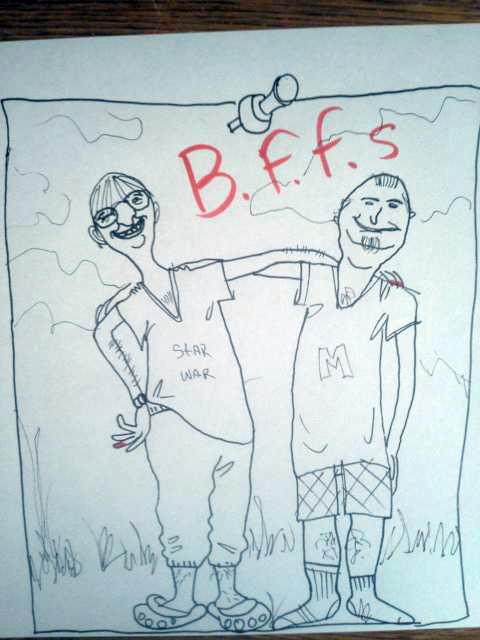 He remained motionless, aside from a rapid vibration of his lower body, almost imperceptible to someone without my acute senses.

I briefly reflected back on those halcyon days when we worked together, hand in hand, mano a mano, like brothers. Closer than brothers. But oh that time was over now. Our friendship had ended the day he decided to maul it upon the woeful altar of ill-begotten comedy and satire.

"Listen to me Matt, you asked for this... you brought this on yourself"

I reached down and picked up my broken external hard drive which once contained my carefully curated collection of Breaking Bad fan fiction.

"Defend yourself coward!" I croaked and lunged at him, swinging the hard drive in a wide arc over my head. If Liam Neeson could have seen me at that moment, I am sure he would have smiled and nodded in approval.

I brought the hard drive down again and again into his face which splattered from my mighty blows as if it was made of skin-colored Gak. I pounded and I pounded until his entire head was unrecognizable, just a dripping mound of pink slime. Him body remained rigid, he never flinched, he never budged. Only his legs continued to pulse with a mysterious vibration.

"This is just like you Matt!" I panted, "you never listen, you never change..."

Drawing every last reserve of energy I leapt at him again, slamming into him like an football player making a goal. His body toppled backwards, an obscene, headless statue, and clattered against the window which immediately shattered beneath the blow. I stumbled to the ground and looked up just in time to see the body tip over the edge of the window sill and disappear over the other side.

Blasts of hellish wind howled in through the shattered window, snatching up GI Joe posters and ripping them back and forth through the room. Dazed, I struggled to my feet and stumbled to the window, gripped the edge and hesitantly looked over.

Far below, I could see Matt's rigid form, still falling, falling. Our apartment was several miles up and I knew it would take a long time for his body to reach the barren earth below below. I didn't even need to see him hit the ground, I knew I had done my duty, I had fulfilled my destiny.

I flopped back in my beanbag chair and watched the sun slowly set into the Blood Sea, perfectly framed by the shard-rimmed window frame.

It had been a good day.

I had found new power, new life, new purpose. I was the master, I was king, this was my domain. Nothing, and no one could stop me now.

No birds, no Matt. Just me. Alone.

As the sun was extinguished in the blood sea and impenetrable darkness engulfed me... I smiled.