If you've ever played minesweeper on the highest difficulty level and beat it, like I have, you will know exactly what I am talking about when I explain what happened next. One second, my wife's face was smiling, and the next second, she was making a small 'O' shape with her mouth, just like the little face at the top of the minesweeper screen when you click on a tile. Her face came closer and closer to mine and then she placed her lips that were still making the 'O' shape on my cheek.

My children cleaned the dishes off of the table, shooing a few birds away as they did so.

My wife followed them into the kitchen, and I was finally left alone. I carefully reached up and lifted my glasses from my nose. You could say that they are a very specific prescription because they are.

Although I have very steady nerves, my new hands betrayed me and smashed the lenses to fragments when the bird at my elbow let out a sudden screech. 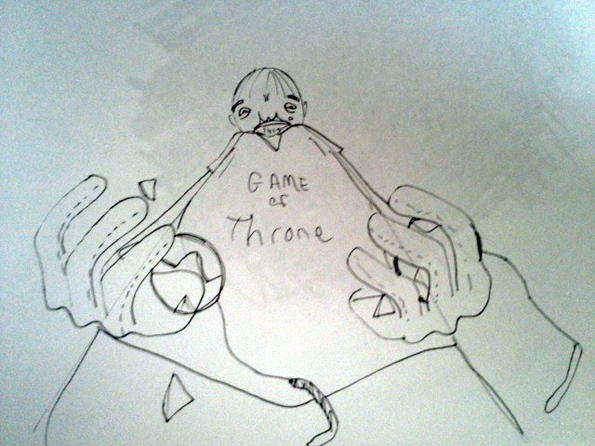 The visible world around me blurred and swirled and warped and twisted just like when you drink too many alcoholic drinks in the critically acclaimed Red Dead Redemption video game.

Luckily, I have a perfect sense of balance because I was born with very sensitive inner ears.

There is a part inside your ear called "the snail shell", and inside there are billions of tiny hairs, when the fluid inside the "snail shell" flows back and forth, it rubs against these hairs, and sends a message to your brain explaining which direction you are moving.

I say all that to say this: I theorize that I was born with roughly double the amount of hairs in my snail shell.

While this gift has a few drawbacks, the primary one being that I get very motion sick and vomit frequently, but it also has many benefits. For instance, I can precisely know when I am falling over.

Thanks to my special ability, I could sense my body toppling over, the wind rushing past me, my arms flailing. I twisted my body mid-fall, like a cat, and my face crashed into the edge of the table. This helped slow down my descent but it did not stop it.

I continued falling, my inner ears sending perfectly timed messages to my brain. I could calculate the exact angle my body formed with the ground at that precise second which actually was a very sharp angle because right then I slammed into the unyielding tile floor.

I have often shaken my head in disbelief when I saw news reports about returning soldiers who had PTSD but now I understood what it was like to go through horrible trauma and I could identify with them. But it was the ultimate injustice of this world that they would receive medals and accolades and free health care, and a hand shake from the President, while I received nothing.

This trauma was mine to bear alone.

Groaning and whimpering in pain, I began to massage my bruised and battered face and that was when I realized that the razor-sharp bits of glass from my shattered spectacles were embedded in the soft denim of my hands.

As my already blurry vision filled with blood and darkness, I could just make out a small, black creature perched on my chest, its red eyes peering at me, a quiet clucking coming from its throat.

"What is the deal... with all these birds?" I muttered, mouth full of broken teeth.

I fell into the sweet release of unconsciousness.

Thanks to star war betamax for the words and illustrations! Stay tuned for the exciting conclusion!