I immediately started running as quickly as I could, thankful that I had recently read a lifehacker article about how to run like the Tarahuma Indians of Mexico who run wearing only sandals they fashion out of tire treads and leather and they run for many many miles. I called upon my vast knowledge of their running technique and prowess and it was as if in that moment my Crocs animorphed into authentic Tarahuma running sandals, giving me the speed and agility that I needed to reach my apartment.

As I ran I stopped to catch a glimpse of myself in a passing window that I was passing I and saw my reflection in it. 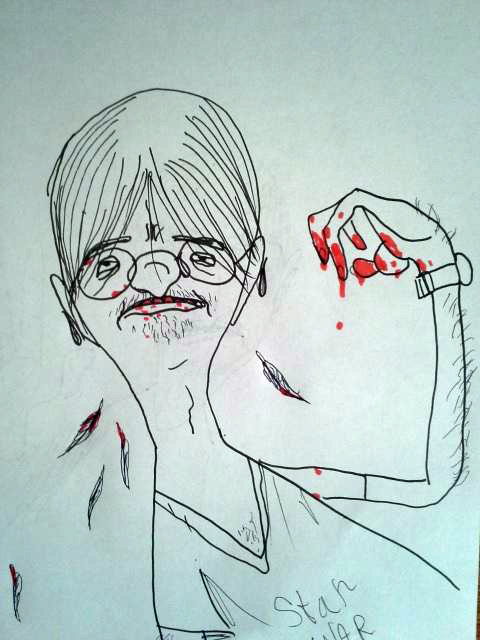 I was instantly and strangely aware of Matt's thoughts and his actions. In much the same way that a Jedi master, such as Obi Won Kenobi, would be aware of the actions of his apprentice's thoughts and actions as they chased the assassin through the torturous streets of the planetcity Coruscant.

I had a desire to thank whatever higher power had chosen to bestow these forcelike powers upon me but I refrained from doing so because I am a devout atheist/agnostic.

i did take a moment to wonder if Matt would turn into a force-ghost after I bit his head off and I sincerely hoped that he would not because if there was one thing I wanted less it was Matt muttering cryptic platitudes into my ear at inopportune moments such as the middle of the new Teenage Mutant Ninja Turtles movie.

My apartment building stood before me, solemn and silent, alone on the block. Desolate, empty lots surrounded it like so many empty M&M packets after an afternoon in which you would eat a lot of M&Ms.

The building looked like something that I would have spent countless hours meticulously building block by block in single-player Minecraft in that it looked exactly like an erect penis.

I stood for several minutes at the doors of the elevator, repeatedly pressing the button, which never lit and the elevator never opened or even made the ding noise that they make.

With each button press I made sure to demonstrate my dissatisfaction with the situation by puffing out my cheeks and blowing air out of my nostrils in a muted snort. I would also occasionally add to the effect by shaking my head and rolling my eyes.

If anyone had been around, which of course there wasn't, they would have surely nodded in agreement and perhaps given an empathetic shrug as if to say "We are in this together and I sympathize with your predicament but am unable to do anything to remedy it"

We are all just lone wolves passing in the night.

Next to the elevator door stood a mannequin. It looked like the type of mannequin you might see in a N64 game featuring mannequins. It was devoid of any detail or external features, its skin the color and texture of a gray denim. It wore no clothes. I glanced downward at the genital area as I always do when confronted with a new mannequin and it had no genitalia except a tiny label where a penis might have been.

The label read "Hecho en Mexico" which is Spanish for Made in Mexico. 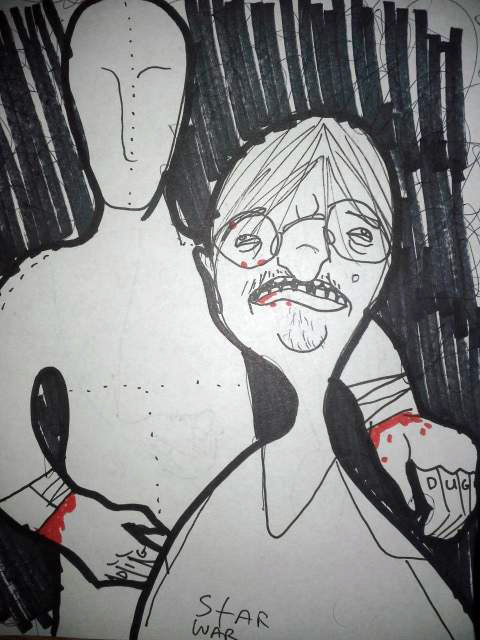 The mannequins hands were very different from the rest of the mannequin in that they were actual severed human hands that had been attached to the mannequin with some sort of tape that looked like gorilla tape and might have been. Fresh blood was pooled on the floor beneath them and was soaking into the arms of the mannequin.

On the first three fingers of each hand was tattooed a letter, they read:

Clutched in the still-bleeding hands was a simple cardboard plaque that read: "The elevator's out."