One of the reasons my parents never accepted me was because of my X-Man-like abilities, one of which is the power to survive on much less sleep than the average human.

Due to this special power, I awoke the next morning after a brief 8 1/2 hours of sleep. As usual, I was instantly alert. I sat up in bed, carefully lifted my spectacles from the bedside table, and attached them to my face.

"Good morning." I muttered, eyes blinking as the adjusted to the sunlight streaming in through the sheer window curtains and falling up the lush floral patterns on my bed sheets.

"Good morning sweetheart" Said a raspy, feminine voice from beside me.

I turned, and was mildly surprised to find Starlight lying in bed beside me.

It seemed the right conclusion to things. "This was the way things should be, and not some other way." I whispered, sagely.

I had corrected the universe, I had removed the one source of pain and fear and rejection and bad breath that was Matt. Now the world could continue the way it was meant to be.

She sat up beside me, her blonde hair pouring from her head, a waterfall made out of yellow hair instead of water. She swung her feet over the side of the bed and stood up.

"I'll get breakfast" She yawned. Her Taz' teeshirt draped over her body like a Greek toga.

In the critically acclaimed video game Deus Ex: Human Revolution, you assume the role of a man who has been cybernetically augmented with nanomachines, you truly are a cyborg, half man...half machine. These augmentations allow you to perform superhuman feats of strength as you advance the award-winning plot that, frankly was superior to any Hollywood movie I have seen recently, however I will add one caveat and that caveat is that I haven't seen a Hollywood movie in several months so there may be some good ones out by now.

Regarding cybernetic augmentation, I was just thinking that maybe something like that would come in handy when I discovered, much to my chagrin, that I had no hands. My arms ended in smooth stumps at the wrists. 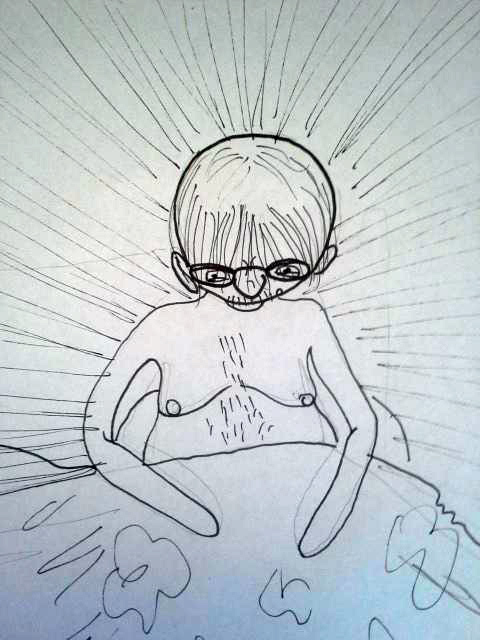 "Oh sweetheart..." Starlight said as she reentered the room which contained our marriage bed that I was still sitting on, "You left your prosthetics downstairs"

She tossed a pair of objects into my lap.

In my lap lay the missing hands from the mannequin.

My stumps were drawn to the denim mannequin hands magnetically, in much the same way that a magnet would be drawn to another magnet or a piece of metal that is magnetic.

As my arms neared them, they began to vibrate and shift upon the sheets, almost alive. With a lurch, they sprang into place on my arms, instantly fusing themselves into place by some unknown means that was entirely unknown to me.

I lifted my new hands in front of my face and turned them front to back. I tried flexing my hands, just slightly, and they responded by frantically clutching at the air in violent spasms.

I have often garnered many compliments from my friends about my fine motor control and dexterously.

There are few men who can please a woman the way I do with my fingers when I masterfully play the flute.

I have taught myself several sleight-of-hand cards tricks and spent hours performing in front of a mirror, knowing that one day the world would be ready.

There is this one gesture I do where I hold my hand horizontal and wiggle my fingers while tilting my head to one side and saying "Ehh" that very accurately conveys my emotions to the cashier when they ask me if I would like to donate to the Red Cross.

Were these days over? Would I never complete the Candy Crush Saga?