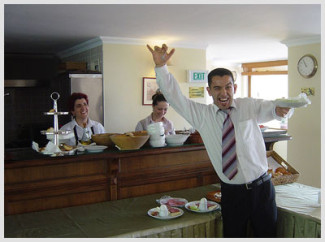 There was a guy whose name I can't remember, who handed out the uniforms. He was pretty cool in a gangsta way. I liked him because you could bullshit with him.

Apparently he was selling coke from the uniform window. His customers included some of the management and pretty much the entire banquet department.

When the shit hit the fan, he was fired, and two of the coolest managers. I liked those dudes, but I guess maybe they were cool because they were coked up.

Banquets got away scot-free. No one ever said anything about the bottles of booze hidden in the banquet manager's desks either.

We used to have a lot of Bosnians in housekeeping. One of them went into the men's restroom in the lobby to clean it. She yelled to see if anyone was there - no answer. She went in and then ran out. There was a man barely conscious on the floor. Apparently he was speaking an unknown language and had no ID.

About that time a front desk agent came in to work who was Romanian, and another came in who was Polish.

One of the agents thought they recognized some Swedish. She also remembered a group with a bunch of Swedish guys. She called one of the rooms and they came down and recognized the man.

Apparently what happened was they all went out the previous night to get hammered. The one guy picked up a woman and they started talking. Things started getting hot and heavy and need to move to other accommodations.

Apparently she slipped him a mickey and robbed him blind. Somehow he was able to get to the hotel and passed out in the public bathroom - thankfully in possession of his kidneys.

Yes, our hotel hosted the guests of the Springer and Jones shows. This was during that time when most people figured the guests made shit up but weren't entirely sure.

I will say that Jenny Jones checked up on her guests. Jerry Springer didn't care - as long as the guest was entertainment.

Here is an example.

One time the Jenny Jones crew found out a guest made up their story. They called us to tell us they weren't paying for the room and that they spoke to the guest about it. I was told to keep an eye on it. About an hour later I saw the guy leaving the hotel with his luggage (garbage bags). I ran after him (stupid I know). He was a stereotypical goon - fat, glasses, no neckbeard, but the neckbeard was there in spirit. I'm sure he masturbated to Tub Girl though. I asked him if he was so and so, and he said yes, and he stupidly came with me dragging his garbage bag. We held it until he paid which he did.

On the flip side, Springer had one of his love triangle shows. This one triangle was a girl and her two proto-emo boyfriends who were bisexual. They fought and fought on the show, but upon entering the hotel, they were the bestest friends. I know this one because my wife attended that taping.

Apparently in real life Jerry Springer has an orange face with a regular flesh-colored neck.

He sings to the audience during the breaks.

If the audience doesn't whoop it up enough, they are made to do it again until it's right so that it can be edited in.

The taping took over two hours - mostly because of aforementioned "whoop" takes.

Jerry has groupies in the audience. One woman has a picture of Jerry tattooed on her chest and attends every show. Fascinating woman I'm sure.

Anyway on to the Springer guest stories! I don't have any Jenny Jones stories interestingly enough, then again I'm sure that's why she's forgotten now.