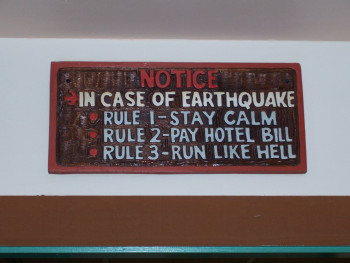 That was a nice day. They promptly hung a swastika flag outside their window. There was a condo next door, and for some reason the Jewish families living there didn't like it. They complained, so the Nazis just hung it inside their room and opened the drapes. We made them take it down.

There was a show called "Trailor Park Drag Queens". As luck would have it, there was a large group of people attending a bar-mitzvah checking in the same time. If you ever wanted to see a large group of conservative Jewish mothers scrambling to shield the eyes of their sheltered children, then that would have been a good time to see it. The Springer guests looked exactly as you are probably imagining it. Maybe worse, because it was pretty bad.

I always used to joke that you could tell who the Springer guests are due to the fact that their eyes were on the opposite sides of their head. This couple was no exception. The made a ninja move and slipped out during the early evening. When we looked back at the security cameras, they had lots of garbage bags (hillbilly luggage).

When we went to their room we were shocked. You know the expression "took everything that wasn't nailed down"? I can truthfully say these people also took things that were nailed down. The only things they didn't take were the bed, TV, minibar, and other furniture. Here is what they took:

A few Christmases ago a large company had a Christmas party at the hotel. I think the company was Charles Schwab, and if it wasn't, it was a similar company. Anyway, they hired a midget to be an elf.

The elf liked his liquor.

He was an angry drunk too.

He went down to the carport in front of the hotel and started kicking the cars for no reason. The manager on duty, who happened to be effeminate, tried to make the wayward elf calm down. The elf proceeded to call the mgr every gay epithet in the book. He then tried to kick the mgr, but all he had to do was hold the midget back ala Three Stooges Style.

Meanwhile security called the cops, and while waiting for the cops to show up, security went out front to take care of things. The midget went after the security guy. Security had less patience than the manager on duty. The security officer picked the midget up and tucked him under his arm and carried him across the street where the cops found him a few minutes later.

Yep, Christmas spirit and all that.