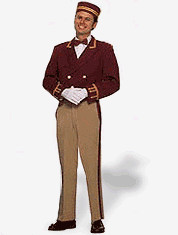 Here are a bunch of other insane stories from the hotel industry, starting with Sprinkles.

An old woman walked in and asked about a room at 4 am. I quoted her a rate and she said it was too expensive. I offered her discounts and then gave her the lowest rate possible and it was still too expensive. I was starting to lose my patience and I was about to tell her that unfortunately that's the lowest I could go, if she would like a cheaper room please try another hotel. She then ran away towards the pool and jumped in and started to swim. I called the cops, she got out of the pool and ran out of the building before they came. I haven't seen her since.

I've worked as a front desk manager in the same hotel for three years now; it was my student job until I graduated, now I'm still here because I'm lazy. It's a tiny, all-suite 65 room place, and I'm the only employee within miles of the building when I work the 3-11.

I had a dude walk in and complain about the rate (we're expensive) and then kinda freak out and yell at me. He leaves in a huff and comes back two minutes later with a beer, gives it to me and apologizes for the outburst. I think "Hey, what a cool bud!".

Twenty minutes later I'm nearly incapacitated, tripping out on GHB and still manage to finish out my fucking shift, going through zombie-motions. That's how easy my job is.

Five minutes before my shift was over, a guest comes up and asks for a pillow. I ran to go get it and brought him back a towel. He says no, repeats himself, so I go back and bring him sheets. Turns out he's an off-duty cop, realizes something's up, and calls the real police; they get there as I'm stumbling toward my car, unaware that anything untoward had happened at all. I wouldn't have survived the drive home.

Make sure the cap is on the beer, folks!

I've worked in several hotels (always housekeeping), and all the ones I've worked at have changed the sheets between guests. At least, you were supposed to and I always did because I believe in the Golden Rule. But yeah, bedspreads usually don't get washed very often.

I walked in on naked and/or fucking people several times. If you're staying at a hotel, and aren't getting up early, for god's sake put the "do not disturb" on your door, or at the very least, tell housekeeping to go away when they knock on the door. I can assure you they don't want to see your pasty middle-aged man ass.

Once I walked into a room to clean it and found about four cases worth of empty beer cans and blood all over the sheets and walls. It turned out the guy who'd been staying there the night before had been arrested for beating the shit out of his girlfriend in the hotel room. Luckily, my manager was conscientious enough to clean that one herself and not subject me to any blood born pathogens.