At a Glance: Back as a kid I rented this lump of crap and since then I never forgot how much I absolutely hated it. In the 1990's, Nintendo thought making educational games with Mario's likeness would make sense or at least, money. If there is anything I know from playing video games all my life it is that educational games are not fun no matter what character you shove into it.

Story: Basically, Bowser wants a bunch of artifacts from the past to make some kind of awesome museum so he builds a time machine and steals them from whenever they were created or used. Now, I may be out of line for suggesting that he just go steal the artifacts from museums and not bothering with engineering a time machine but whatever I guess!

You take over as Mario like any of his games and must stop Bowser... like any of his games. However, this time you don't have to worry about some mushroom princess who <put joke about her always getting kidnapped here because that hasn't been overdone to death>. Instead, you must take artifacts back in time to their rightful owners (who all seem to know Mario and modern trends), surf, and do history lessons! Awesome!!!

Founding fathers... or psychics?Gameplay: Really I could save myself time writing and your time skimming through this article by just saying "the most boring game I have ever played." However, the "higher-ups" in the Something Awful conglomerate internet Monopoly would not be too happy.

Now, when I think of gaming, the first thing that comes to my mind somehow has nothing to do with trying to remember all the history classes I have ever taken and basically taking fill in the blank tests. I know, I know, I am completely out of my mind but just hang in there. Once you take the first artifact back into the past, which are in no particular order (DYNAMIC GAMEPLAY! WOAH!), you pretty much have played the entire game. After that, it repeats with a different artifact, different test, and the same horrible surfing mini-game.

I hate the surfing mini-game. You just surf around in an infinite 360 degree looping lake of some sort collecting mushrooms and avoiding spikes. Oh, by the way, the mushrooms and spikes are roughly the same size and most of them spontaneously disappear. Good luck! I am not sure if the disappearing mushrooms are intentional or not but it has to be the most annoying point in the game. Every time you want to go to the past you have to surf around, collect twelve or so mushrooms, and plummet into a whirlpool. Why? I have no idea! They never explain it and all it seems to be filler. Really bad filler. Imagine biting into a cream filled doughnut only to find out that instead of cream, you were eating actual shit.

The time machine itself also annoys the hell out of me. Sure, there isn't much work involved but it is tedious as all hell. The numbers and locations move at a crawl and why not have it in the game already? Or why not have a "digital" input that would make things faster? The game takes place on earth in 1993 but I'll be damned if a time machine doesn't have some kind of 1930's interface! 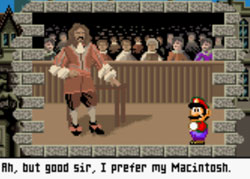 Ugh...Most of the actual artifacts make some sense such as Joan of Arc's shield, Beethoven's 9th, Declaration of Independence, and even Leonardo Da Vinci's notebook. However, one artifact is actually an apple that belongs to Newton. Apparently without that particular apple, Newton would have no way to prove gravity.

Graphics: The best way I can describe the graphics in Mario's Time Machine is, "eh." The animations, however, are horrible. For example, when Mario tries to walk somewhere in the distance, he shuffles away awkwardly. I really can't describe it without making some kind of "stick up his ass" joke so just take my word for it.

Other than the previously mentioned disappearing mushrooms/spikes, the graphics are mostly comparable to someone doing decent drawings in MS Paint or perhaps Mario Paint, which I really should play instead of this garbage.

Enemies: Well... there are those spikes that take away all your mushrooms during the surfing mode but that's about it. You don't have lives or health or anything indicating you can actually be hurt and I never managed to die. Mario can jump but I have no idea what the fuck for considering this game has zero platforming. After I turned in the first five artifacts and found out five more were waiting for me, I quit so maybe the game picks up an hour or two in but I doubt it.

Defining Moment: Beethoven telling me to "Go away." As always, I should have listened.