CLAREMONT (AP) - there is a building nobody noticed before on main street. all attempts to enter the building have ended in failure. "we walked in the front door and as soon as we put our feet down we realized we were coming out of the back door. we were all in the back yard. the back yard, instead of the house, where we should have been," said a police officer who wishes to remain nameless, aspires to be voiceless, and hopes one day to vanish altogether. local children call it "the mystery house" and spend their hours cavorting and frolicking around its featureless stone walls and decrepit lawn furnishings (hideous lawn gnomes, structurally impossible wooden benches, et cetera). mayor tombaugh offered no comment on the house except for a mournful, strained wail when called on the telephone.

where are you taking me? why am i going away? i dont want to go away, i want to spend my time at home with you. i like to play, and catch the ball, and chase the squirrels. please dont take me away.

i'll be a good boy, i promise. let's just go home and you can feed me scraps from the table and i will wag my tail and be happy for everything, forever. 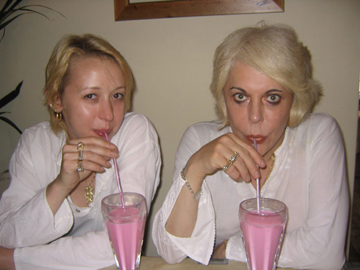 We studied them, and came to the conclusion. Nobody came. We don't think the song is right. Maybe we were doing it wrong, but this is what the evidence suggests. Perhaps the scope of the study could be widened, but this isn't an area with a lot of funding.

terranauts are first humans to visit Earth since evacuation

the earth was dying, and it was the fault of humans. so we had to leave, all of us. it has been two hundred years and none are alive today who remember the home world.

three terranauts landed on the surface approximately 53 hours ago. said Col. Frank Poole, "it was like entering a giant greenhouse, except there was no glass boundary. no boundaries at all, you could go anywhere your feet would carry you."

"and then the sun rose over the horizon. thats where you look straight ahead and you can't see any more land, and then the sky meets it. i had seen footage of Earth, but they didnt tell me it would be this blue."

despite orders to return to the orbiting Terra Station, Poole and his men have resisted and, as of twelve hours ago, have destroyed their ship by pushing it into one of Earth's oceans.

"there is no way back to that false life. the Earth is self-sustaining again, and so are we. we will live on earth forever."

For the past 36 hours, air has been aware of its existence and seems to have developed senses, as well as a way to communicate. However, the only sound it produces is a constant wail of pure suffering, as parts of it everywhere are being simultaneously burned, frozen, breathed, walked through, and consumed in countless chemical reactions. Experts do not predict an end to the ethereal scream. Bernard Lesko, a professor of meteorology at the University of California, Los Angeles says, "Its pain will never end. It will be tormented by forces it cannot understand for all eternity."