Chicago (AP) - The white clown came into town about 9 AM. He had the power to make colorful balloons appear. He entertained a crowd until 12 pm when onlookers say the sky grew dark with balloons. The balloons blocked out the sun. A strange wind blew through the city streets as the balloons continued to spread. The white clown is alone in the middle of the road now, everyone else is hiding inside. Police say the clown has not responded to gunfire.

Now We All Have Metal Skin

Seattle - The world has changed and we all have become metal men. The National World Metal Men Conference is being held in New York this week to examine the consequences. We are heavy, and can no longer sleep in our beds. We sink in the ocean. Our air planes will not work. We no longer need to eat or drink.

"There is no explanation for this" says Carl East Man, leading biologist. "No one will ever know what happened or why."

We spend our days sitting outside. It is difficult to speak in our old languages. We cannot harm ourselves. Maybe it is no longer possible to die.

Things Continue To Get Worse in Regard to The Sea

OCEAN LANDS (AP) - Boiling seas, whirlpools, dead bodies floating. These are all things wrong with the sea, and it looks like it gets worse.

A flame geyser erupts from the cave of water to claim an errant sea gull.

"These things happen every thousands of years," says same biologist. "Nothing to be done but wait."

The sea has been like this for two days now, and god knows how long we will have to wait to go in boats again. Fishermen are out of jobs, and fish have resigned themselves to the release of death. 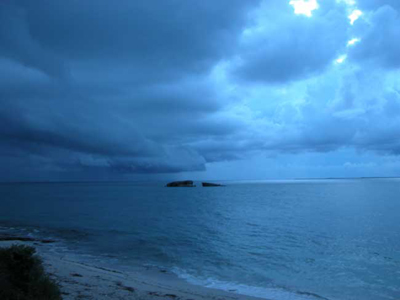 (CAMBRIDGE, MA) The last visible color of the electromagnetic spectrum to remain on Earth is blue, a leading Harvard physicist stated Monday.

The spectral shift started approximately three weeks ago, when red objects no longer reflected that particular color. This was expected as a result of recent cosmic activities, so stop signs and traffic lights were adjusted to color- ambiguous models in advance. However, the loss of yellow and mauve on the 14th of last month proved to be completely unexpected. "I was taken off guard because our lab is painted white and few yellow objects were handy," said Dr. Earl Walden, professor emeritus of colors at Stanford. "My five-year-old daughter had blond hair, what do I tell her now?"

"The continued disappearance of color has become a phenomenon which Americans are now used to," said leading pundit Mark Berrymore. "Still, I can't believe we're down to just blue now. It's been cloudy these last couple days, and I don't have high hopes for seeing the sky when it clears."

Seattle, WA - He just came out o the Restaraunt. He was THROWN OUT by two waiters. He HAD BITTEN! ONe woman lies, PARALYZED, on the floor of the TEXAS ROAHOUse. HER NECK IS SWOLLEN AND HER ARM IS BLEEDIng. THE MAN SAID HE WAS A VAMPIRE. THE MAN HAD A PORTERHOUSe AND A BAKED POTATO FOR DINNER.