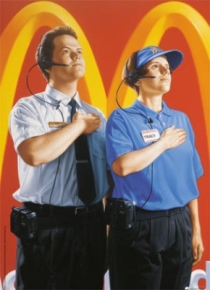 When I was at BestBuy:

"Big Joe" is the lift they use to stock TV's and stuff up high. I was taking it into the TV section to put up some TV's (merch sucks), I proceeded to crash it into a whole row of plasmas. A huge spark and smoke shot out from behind. I had shorted out the main electrical conduit and destroyed roughly 10 grand in TV's. It was very comical and showed the level of my ineptitude. Shockingly they were very cool about it.

Another time, I was at the top of the store hanging signage on Big Joe. I needed a carpenters knife to cut excess rope and was going to come down (Keep in mind we are roughy 20-30 feet up) but instead an employee just said he would toss it up. Before I could tell him no a knife was headed directly at me. It's highest point actually made it up to me but it was about 3 feet over the ledge and I wasn't about to reach out for it beyond the platform. As I watched its descent I knew it wasn't going to be good. It made a direct attack on one of the credit card signing/scanning machines. The glass exploded and went everywhere. It was quite the sight from my perspective.

I fumbled and then stepped on and cracked a DVD that had over 4300 scanned pages of evidence for a VERY high profile murder case in progress.

Thankfully it wasn't even close to the only copy so I just got made fun of.

When I was working HVAC, I forgot to bring the mounting screws for all of the roof curbs on a Home Depot we were building. "Don't worry, I'll just bring them up and screw the curbs down first thing tomorrow morning," I thought.

It was windy that night, and in the morning I came back up to find $10,000 worth of roof curbs all bent up from flipping around up there. 2 of the curbs even flipped off the roof entirely, and one almost took out a parked car. The only reason I didn't get fired over that is I went over my "do it tomorrow" plan with the other guy working the site with me and he okayed it.

I managed to knock out a sizable portion of the US Army's phone/data comms for a particular city in Iraq. (undisclosed for CYA reasons) I was poking around the workstation and noticed that the backup disk was reporting 0 bytes for key files. Hmm, that's odd. I decide to overwrite the files with ones from the primary disk to check and see if that fixes the problem. General Dynamics opted to remove the CLI from our software, leaving their crappy GUI as the only file manipulation tool. I highlight the files I want to transfer, and hit copy. Unfortunately for my camp and the three or four other locations that depended on my switch to communicate with the outside world, the utility ignores highlighted files and only transfers from the left to right window. Oops. By overwriting critical files on the system drive, I just took a multi million dollar assemblage offline. Since the backup was corrupt, immediate recovery was out of the question; a convoy had to travel to our Battalion headquarters to get replacement drives. Since I killed the switch, I earned my spot on that convoy.

My first week or so when I stocked shelves at a grocery store, I dropped a case (of 12 32oz bottles) of hot sauce, which made a huge mess but made the store smell awesome. The assistant manager I was working with helped me clean up and even thanked me for not spilling something that smelled bad. Fortunately, nobody noticed that it seeped into a floor display of 12 packs of soda.

Working as a new projectionist at a movie theatre, I was told to open up one of the projectors to thread a film. I opened it like I would a door. Turns out you need to twirl a knob underneath the machine to open it the real way. I ended up breaking the machine and costing the company 300 dollars. I was immediately knocked down to door monkey for the rest of my time at that job.