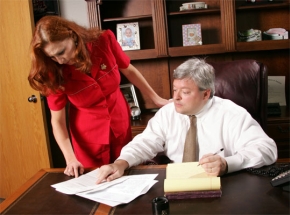 I work in an IT support / administration capacity for an education and training provider.

About two weeks ago, we decided (as a department) that our fridge could use defrosting. Picture four IT geeks standing around a frozen over fridge/freezer scratching their chins.

I am not a patient guy, so after applying a liberal dose of boiled water, I grabbed a large screwdriver and proceeded to remove a large chunk of ice. In removing this chunk of frozen hell though, I put the screwdriver through the freezer element-thingy-majig and let out all the magic gas that keeps things cold.

$300 later, we have a new fridge for our department and I am forever banished from holding any tools with sharp edges.

When I sold cars way back when I accidentally slashed open someone's leather seat with a razor. I had it in my hand to clean off the stickers and then when I used that same hand for leverage to get out the car, sliiiiiiiiiiice. I was so terrified I didn't say anything, I was selling Acuras so it's not like it was a $20k car. While I was wondering what to do (crying in my office) the new owners saw it, calmly told the manager and they all figured it came from the factory like that and sent it back for new leather. Everyone finished the day happy and never wondered why I was white as a ghost and obviously had been crying. I guess it's a dealership and everyone is usually crying in there.

I was a seasonal worker in a department store during high school. Late one night I got bored and decided to play with the cash register. I learned the following:

1) AT&T calling cards when swiped will complete a transaction
2) $99,999.99 is the largest transaction the cash registers will take
3) There are corporate people who watch for crazy transactions like the above

About half an hour later I got a phone call asking me if everything was ok. They explained they had seen some odd transactions. I told them I fat fingered #2 and a customer gave me the wrong card on #1.

As a result of #2 our store had the highest total sales in the entire company for the first time ever. The next day (when the transactions were backed out) we were dead last with an ungodly negative sales total.

So what lessons can be learned from all of this? Freud said that there were no accidents, but he was European so I don't trust him. The only thing to take away from this article is that by being around SA goons, your life insurance premiums probably double in cost. I'm afraid that we have to end things here this week, so as usual, a huge heartfelt hug of happiness goes to all the contributors that helped make my Comedy Goldmine dream a reality. Next week, I will try to find a way to use the following image in an article because I really really love it. Join me then! 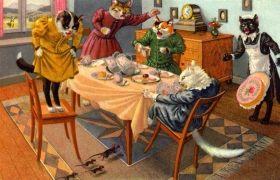