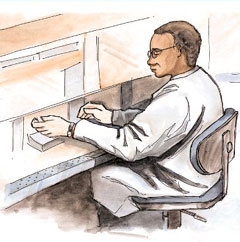 I used to be in the Navy, as a nuclear operator. My screwups were many, but nothing ever big enough to get anyone hurt or killed or any reactors to melt down. They included:

-Many paperwork mistakes (paperwork is HUGE when dealing with reactors)
-Getting shocked by a 1000 volt DC power supply
-Getting shocked while replacing a reactor control switch in such a way that I blew a fuse in the reactor protective system
-Getting the alarm that is basically one step away from causing a protective action on the reactor (something that would probably have gotten me fired, which is very very hard in the military)
-Screwing up a test setup so that water from the ship's steam system backflowed all over me
-Being in charge of someone who did the exact same thing as the previous mistake, after I told him I had made this mistake before, and to god damn it make sure you do everything by the book word for word
-Burning my arm on hot steam piping
-Spreading radioactive contamination in silly ways
-Dropping a piece of radiation monitoring equipment while standing on top of a nuclear reactor, and therefore not being able to work for the rest of the day
-Dropping a detector that measures reactor power while replacing it (the detector weighs about 80 pounds and was basically worthless after this happened)

There's more, but I can't remember any right now. I made so many mistakes, but learned from them all, that by the time I left the navy I was pretty much the go-to guy for nuclear power on the boat. Our boat won lots of awards for our great performance.

When I was overseas I got stuck with TOC (basically the command point for an Army unit) duty for 2 weeks, no days off, 12 hour shifts. It was near the end of my 2 weeks and the end of my shift (probably around 0450) and to lessen the boredom I decided to mop my area. In the cleaning supplies area I went to fill up my mop bucket and realized the pine cleaner I usually use was empty, so I grabbed the unmarked bottle next to it and just used it for mopping. That bottle was CLP (cleaning/lubricant/protect), what one uses to clean weapons.

It took me about 2 hours to clean up after I mopped the entire TOC with the oil (I was really tired and I'm an airhead anyway, can't believe I didn't notice until I was done). Sadly I don't think this is the stupidest thing I've ever done, but it's the only one I can remember right now.

I allowed an inmate with a history of suicide attempts to use a razor and he then cut himself up with it.

I work at a jail, It was a busy night and I passed out the razors and just forgot to make the connection in my mind with his name and his past, It hasn't happened before and I haven't made the same mistake since. I was lucky in that they were just superficial wounds- he had to clench and unclench his fists to get it to keep bleeding. He did have Hep C though.

I work for a natural gas company. From time to time I send out an order to shut off the wrong person's gas.

I was designing a small insert paper that goes into every product the company made, and I accidentally typed the ordering phone number wrong. It was signed off by 3 bosses, so I didn't get fired or in trouble, but they printed 400,000 of them and it cost the company about $30,000.