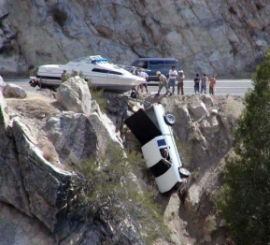 I almost killed some people when I was a food server in college. I broke a glass by the ice cream cooler and my lazy ass just scooped out the top layer of the ice cream (those large brown containers like at Baskin-Robbins). Well about an hour later two people came back to complain about the glass they found in their milkshakes. Sorry!

I was adding a new article to my company's intranet site, I forget what it was about now. I had the Something Awful forums open in another browser and someone had asked for a link to the former puppy mills article in Pet Island so I'd copied that for them. Guess what I pasted into the URL spot on the company's website instead of the new article?

I noticed it like 3 minutes later after a few confused feedback emails came in and immediately swapped it out. Fortunately my boss was out of town that day and didn't see any of them, and no one said anything to her so she never found out. Never happened again because I moved from content author to support for the sites but god damn I still feel bad about it to this day, and it was like a year ago.

I dropped a 2lb bolt at work 75 feet down to the concrete, causing about 15 manhours of work to fix. Others at work have done worse, a guy on the other building dropped a sleever bar (30-40" wrecking bar with a straight tip and a point on the other end) about 150 feet down to the ground on a Sunday. Those are pretty heavy fuckin' tools. All kinds of crazy shit's gone wrong, a fucking bulldozer was dropped 80 feet down because a crane ran out of cable, a 150lb piece of grating fell 50 feet and nearly hit an electrician, and countless others that I've since forgotten.

Back when I first started my job, I was setting up someone with a full theater install. Our most expensive plasma at the time, the most expensive audio system, theater furniture, the works. Now, most of this had to be specially ordered, as it wasn't the kind of stuff we just kept in the warehouse. The customer asked me for a rough estimate as to how much it would all come up to. I went over to the computer and started writing it all up. Now, to order things in, the system requires a phone number and an address. I went ahead and put my own information in as a placeholder, just so I could give him a price, and I planned to clear it all out later and put it back in with his information.

That evening, I was at home and about to head out to the movies or something when I get a call asking when I wanted my TV and surround sound delivered.

I sent out a weekly email by a real estate broker with all the links going to Jenna Jameson's website instead of the real estate broker's - or well, at least for anyone with Yahoo/Google/whatever toolbar installed in IE.

Our server name was "jenna", and that's what got sent out as I forgot to change a few variables here and there before sending out the email - and a lot of our customers' browsers apparently took the lack of any website at "http://jenna/" to mean they should search the net for "jenna" and do a Google's 'I am feeling lucky' --- which promptly landed them on Jenna Jameson's promotional website.

Made both technical and national (evening) papers as well (in Sweden, I should add).

972 litres of milk on an unsteady pallet.
Turned a corner too fast with the pallet jack.
Milk tsunami ensued.

The worst thing *I've* ever done at work(I'm an auto mechanic) is to jump in a customer's Suburban after I was finished with it and head on out the door for a test drive. Except I forgot there was a BOAT strapped to the roof, and our door was partway down because it was winter and freezing cold.

It didn't do shit to the boat and 'Burban, just moved the canoe back a couple inches, but it bent the door all to shit and we couldn't get anything in or out of the shop. I ended up balanced on a forklift ten feet in the air, taking apart the door so we could get the vehicles in and out of the shop. It ended up costing me $800 to fix the door, but I'm the boss, so at least I didn't get yelled at.