Salmon Fishing in the Yemen

EXPECTATIONS: Here's another film that seemed to generate buzz overnight. As someone who knows nothing about salmon, sport fishing, or the country of Yemen, I'm hoping that this film will educate me on at least two of those three. Two out of three ain't bad, as the fat poet once said...

REALITY: It's always a welcome surprise when a romantic comedy challenges what we expect from the genre. Too many rom-coms get bogged down in the battle of wills between the sexes, or the melodramatic trappings that always seem to plague these things. Salmon Fishing in the Yemen understands these problems and instead goes for something a little more offbeat. It's not entirely successful, but for the most part, the journey is worth it.

After a terrorist bombing on British interests in the Middle East, the prime minister's head of public relations (Kristin Scott Thomas) is searching for a PR stunt to promote "Anglo-Yemeni" cooperation. She finds the the perfect project in a joke proposal by Dr. Alfred Jones (Ewan McGregor). His proposal: transplant salmon from northern Europe to the arid desert of Yemen, where a wealthy Sheikh (Amr Waked) plans to catch them for sport. Despite his insistence that he was merely joking, Jones finds himself shipped off to Yemen, where a budding relationship emerges with an executive named Harriet (Emily Blunt), who's sent to work alongside him. 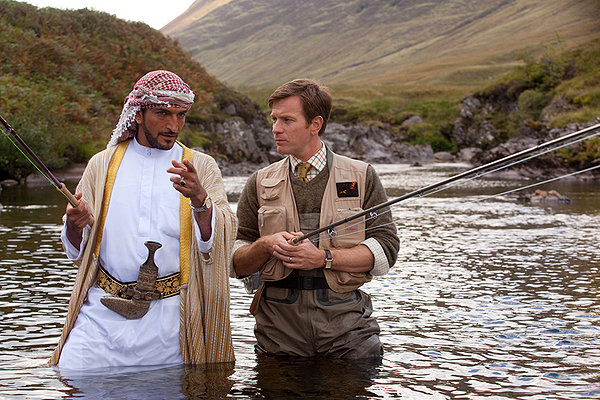 Well, there's the title in action right there.

The film is smart enough to understand how labyrinthine its plot seems. At one point Jones objects to his new job, stating that it's patently ridiculous, but if it's what his government wants, then he'll do his best to accommodate them. That's the film's work ethic right there, if you ask me. A Yemeni Sheikh who loves sport fishing, an emotionally stunted ichthyologist and a lovesick businesswoman hardly belong in the same film, but by concentrating on the relationships between the three characters rather than any ham-fisted attempts at telling jokes, the film sells us on the situation far better than any dating mind-games ever could.

Granted, that's not to say that the film has an easy time of it. Sometimes it has to spell things out for us, like the fact that Dr. Jones has Asperger's Syndrome. Up until a character flat out says it to his face, it's easy to assume that Jones is just weirdly dedicated to his job. Early in the film, we meet Jones' wife and his coworkers, and he seems reasonably well-adjusted; nothing out of the ordinary for a guy working at the Department of Fisheries. Suffice it to say, Ewan McGregor sells his character well, but then as he gets to know Harriet, his sudden shift to awkward, bumbling fool doesn't quite work. 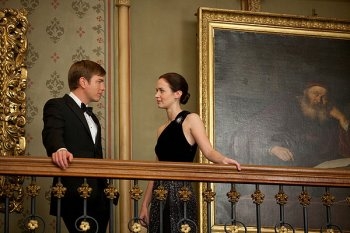 It's important to get out to these Leaning on the Bannister in Front of Golden-Framed Paintings events when you're starring in a romantic comedy.The film's supporting cast is something of a mixed bag as well. There isn't anything wrong with Kristin Scott Thomas as the Prime Minister's PR manager, but once she gets the plot rolling, there is absolutely nothing left for her to do. Nevertheless, she insists on butting into the story periodically to make some crack about how the media will spin whatever situation is currently going on. It's almost as though the writers wrote this script while In the Loop constantly played in the background. "What would Malcolm Tucker do? I know! He'd call the Prime Minister a wanker!"

Amr Waked, on the other hand, is one of the film's saving graces. His Sheikh Muhammad is a man whose dedication to fly fishing borders on the religious. He believes in Dr. Jones' project not only for his own amusement, but also because he believes bringing salmon to the Yemen river will do great things for the people of his valley. While Mrs. Thomas' character gets far too much screen time, Waked seems underutilized. He's mysterious enough to make us wonder about the value of our own pastimes, yet always seems to exit a scene right when we truly begin to understand him.

The Sheikh is an enigma, certainly. His fascination with Anglo-culture manifests itself in a number of odd ways; with his vast wealth, the Sheikh has built a European-style castle in the middle of the desert, and forces his Arab guards to wear kilts. It's a unique metaphor for all the problems associated with trying to Westernize the Middle East (namely that it looks gaudy and stupid), and at times it threatens to overtake the budding romance between Alfred and Harriet.

Lasse Hallström, director of Dear John and a number of real movies, has made a romantic comedy seemingly in utter defiance of the romantic-comedy genre. The romance is understated, the comic relief seems intentionally loathsome, and the actual plot is utterly preposterous. And yet somehow the film works. While the characters may not always be consistently written, their relationships with one another feel earned and even enlightening. When was the last time you could say that about a Nicholas Sparks film?

MINORITY REPORT: I think the strength of modern romantic films depends entirely on whether Emily Blunt is the lead actress. On this occasion she is, and so the film is saved. - Ian "Professor Clumsy" Maddison