EXPECTATIONS: At great personal risk (especially in locker rooms), I've declared my love for Titanic since 14, when I had my first boner-inducing slow dance to "My Heart Will Go On" and spent some ten hours in the theater watching Titanic with various girls and gradually questioning my heterosexuality as I realized Leonardo DiCaprio might actually be prettier than Kate Winslet, even if he shows less skin. At some point in the ensuing decade of sexual confusion, I saw Titanic again, but I've blocked it out, preferring my memory of Titanic as a teenager in a theater, to my memory of Titanic as a grown-ass man on an 18" LCD. With this theatrical re-release, virtually untouched except to separate it for 3D, I can evaluate Titanic fairly as an adult and decide, once and for all, if Titanic's the unjustly maligned artistic masterpiece I've so consistently declared it to be.

REALITY: It's ironic that Titanic, the most expensive film of all time upon its release, spends 195 minutes attacking greed and hubris. As a premier symbol of capitalist excess, a $200-million gamble that grossed $1.8 billion, its populist message seems a little shallow. This is what I think about when I'm not 14 anymore and I'm watching Titanic: There are starving children in Africa, and $1.8 billion could buy a fuckton of ramen noodles and lollipops.


Titanic is so ingratiating, it's a bit pernicious. In three hours, it manages to be a disaster film, a tragic love story, a comedy of manners, a drama about class warfare and a David Warner vehicle in which he perfects the quiet henchman. Why, it's almost as if James Cameron knew that if Paramount was going to gamble with the largest budget of its day, he'd damn well better turn in a film that pleases everyone. 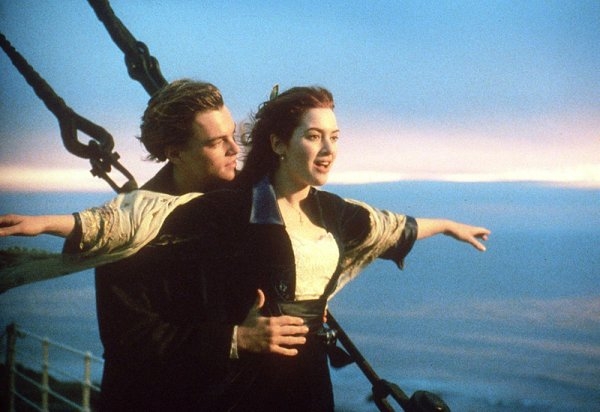 The problem is, Titanic may work as a thrilling disaster flick, a spectacular reconstruction of a great maritime tragedy and a showcase for Kate Winslet's fabulous breasts, but the more elements Cameron tosses in, the more depth he sacrifices. Characters are reduced to archetypes without clear motivations, conflicts are written in melodramatic shorthand and the whole damn film begins to feel like a formula designed to milk the non-rich for ticket sales.

Most problematic are villains Cal (Billy Zane) and Lovejoy (Warner), who are so one-dimensional they feel like holdovers from the silent era. (At one point, Cal even wears a cape!) Serious questions arise about Cal, like: Why would he choose Rose for a wife when society balls are stuffed to the buttresses with pretty debutantes who aspire to be nothing more than kept women? Why does a wealthy heir from Pennsylvania sport such a bizarre and inconsistent accent? And why is he so far beyond redemption when even Hitler shows a human side in Downfall?

Lovejoy's function in the screenplay is even more mechanical. Here is a henchman with no dogs in the fight, an inscrutable cypher who abandons all rational self-interest to persist in menacing Jack and Rose instead of jumping on a lifeboat and getting the hell out. "Sadistic henchman" is an occupation, not an obligation, and whatever samurai duty he feels is neither explained nor justified. Cal's a selfish rich kid, Lovejoy looks like he's had a hard life and is far too old for this shit, and the apparent affection he has for the little snot is quite improbable. 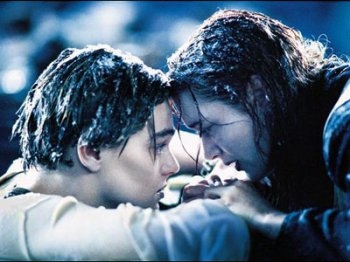 Yeah yeah, it's a tragedy. Wake me up when you've got a new film out.But, y'know, what really irked me this time around was my inability to identify with Jack and Rose, who seem less like "star-crossed lovers" than mechanisms through which a 43-year-old man could lure teenagers into a darkened theater. If Titanic's the shuttered van, DiCaprio and Winslet are the candy, and Cameron's ability to pander to teenagers makes him seem like a likely target had To Catch a Predator been around in 1997.

In the 15 years since Titanic, DiCaprio's become quite the respectable actor for his ability to lose himself in a role while we temporarily forget his pretty-boy past, but even with the burgeoning chops he displayed in The Basketball Diaries two years prior to Titanic, he struggles to sell the exaggerated dialogue Cameron wrote for Jack in a concerted effort to make sure Teenagers Understand the Drama.

The Jack-Rose dynamic is almost like Cliff's Notes for a more mature movie that never was, its nuanced drama bullet-pointed in lines like "They got you trapped, Rose. And you're gonna die if you don't break free. Maybe not right away, because you're strong, but sooner or later, that fire that I love about you Rose -- that fire's gonna burn out." Far from my favorite bit of dialogue at 14, that single line makes me cringe at 29, and most of the screenplay ain't much better. It's truly a bad sign that Titanic's leads are so underdeveloped, Jack's onscreen death actually affects us less than Benjamin Guggenheim's.

Perhaps Titanic's biggest fault is its conflicted attitude towards poverty. Cameron writes hard to equate poverty with freedom but sacrifices time we could spend with the supposedly fun-loving poor folk to villainize the idle rich because Cameron, who'd been rich for more than a decade when he wrote Titanic, either a) hates his peers in Hollywood and feels guilty for being rich, or b) understands that animosity towards the unfathomably wealthy sells almost as well as sex.

Since Cameron himself is a pretty awesome dude (and a damn good artist if given a pencil, considering he drew the nude featured in Titanic), I'm going to give him the benefit of the doubt and go with Option A, but all of these faults make me wonder just how premeditated Titanic's manipulations were.

So, after spending 800 words delineating what bugs me about Titanic, now that I can approach it critically rather than hormonally, why am I prepared to give it a good score? Because Titanic is an early illustration of the Inception rule (more correctly, Inception is an illustration of the Titanic rule, but never mind): A good film can recover from a tedious, expositionally necessary first half if it delivers with more than an hour of orgasmic, well-orchestrated spectacle.


Titanic delivers, and goes about it with a surprising amount of artistry. This isn't to say the CGI isn't dated (it is), but that Cameron displays a intuitive grasp of how to accurately recreate an escape from a buckling ocean liner without once confusing the audience. Part of this is due to Cameron's almost maniacal obsession with small details of the Titanic disaster and his devotion to recreating the ship inch by inch, but most of this is due to damn fine directing built on spatial awareness and camera blocking.

If Michael Bay can't show two robots fighting without confusing his audience, how did Cameron manage to recreate such a massive disaster? Simple: Cameron the director is ten times as talented as Cameron the screenwriter, on whom most of Titanic's faults can be blamed, and most modern action filmmakers could stand to learn a thing or two from him.

(Side note: I hope Star Wars: Episode I - The Phantom Menace and Titanic, whatever their faults, are reigniting the practice of wide-releasing older movies. I also hope audiences continue flocking to these in droves because it benefits pretty much everyone involved: Hollywood makes back some of the money they're always bitching about losing, newer generations get the chance to use their cell phones during older films in the intended environment, and we critics get to continually reevaluate our relationships with the films we loved and hated as teens.)

MINORITY REPORT: The problem with the success of Titanic is that nobody can really explain it. What is it about Titanic that captured people's imaginations that other films don't have? That's why they just went ahead and re-released it. - Ian "Professor Clumsy" Maddison